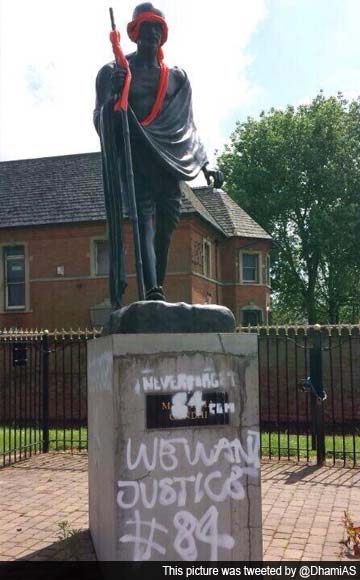 London: An iconic statue of Mahatma Gandhi in the UK has been vandalised in the city of Leicester apparently in protest against the 1984 Operation Bluestar military raid on the Golden Temple.

Graffiti saying "Never forget 84" and "We want justice #84" has been sprayed on the base of the statue in Leicester's famous Golden Mile of Indian-origin restaurants and shops.

It is believed that the messages are in reference to Operation Bluestar in June, 1984, when the Golden Temple in Amritsar, the holiest Sikh shrine, was raided by the Indian Army to flush out Sikh extremists holed up inside.

The incident happened yesterday and police have launched an investigation.

Sikhs from Leicester and around the UK today marched through London to mark the 30th anniversary of the siege.

"To think that somebody has felt it necessary, either an individual or a group of people, to vandalise in this foolish and idiotic way, such an important part of the heritage of India, as well as the heritage of Leicester, I think is a disgrace," he said.

Promoted
Listen to the latest songs, only on JioSaavn.com
Leicester City Council workers removed graffiti from the plinth of the bronze monument this morning.

Leicestershire Police is treating the incident as criminal damage and have appealed to the people who might have information about the incident to contact them.