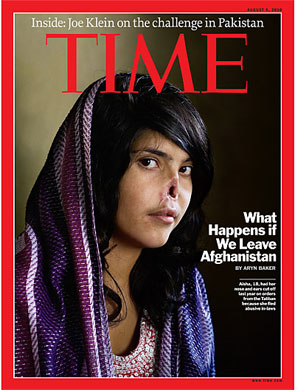 Kabul: She cannot read or write and had never heard of Time magazine until a visitor brought her a copy of this week's issue, the one with  the cover picture of her face, the face with no nose.

On Wednesday, the young woman, Bibi Aisha, left Kabul for a long-planned trip to the United States for reconstructive surgery. Earlier in the day, as she prepared to leave the women's shelter at a secret location here that has been her refuge for the past 10 months, the 18-year-old was unaware of the controversy surrounding the publication of that image.

"I don't know if it will help other women or not," she said, her hand going instinctively to cover the hole in the middle of her face, as it does whenever strangers look directly at her. "I just want to get my nose back."

The debate was fueled in part by the language that Time chose to accompany the photograph: "What Happens if We Leave Afghanistan," pointedly without a question mark.

"That is exactly what will happen," said Manizha Naderi, referring to Aisha and cases like hers. An Afghan-American whose group, Women for Afghan Women, runs the shelter where Aisha stayed, Ms. Naderi granted photographers access to Aisha -- although she was not aware of Time's plans to run her photograph on its cover. "People need to see this and know what the cost will be to abandon this country, " Ms. Naderi said.

As Ms. Naderi would be the first to concede, however, things are already bad enough for women in Afghanistan without a return to a government run by the Taliban. Noorin TV in Kabul has been running what it has called an investigative series suggesting that the shelters, all operated by independent charities, are just fronts for prostitution. The series has offered no evidence, and the station never sent anyone to visit the principal shelters.

President Hamid Karzai, once seen as a champion of women's causes until he failed to deliver on promises to appoint many women to cabinet posts, convened a commission to investigate complaints against women's shelters. A report is expected soon. The panel's chairman is a conservative mullah, Nematullah Shahrani, who has publicly bandied about the prostitution claim.

Even in the absence of a government run by the Taliban, Afghan women suffer from religious extremism, although they have enjoyed a great deal of progress. Thousands of girls' schools have opened since the fall of the Taliban, and women are active in the Parliament and the aid community, where an estimated half a billion dollars in international assistance is now destined for gender-equality programs.

"Feminists have long argued that invoking the condition of women to justify occupation is a cynical ploy," wrote Priyamvada Gopal in The Guardian, a liberal British newspaper, on Wednesday, "and the Time cover already stands accused of it."

BagNews, a left-leaning Web site about the politics of imagery in the media, saw the matter in conspiratorial terms. "Isn't this title applying emotional blackmail and exploiting gender politics to pitch for the status quo -- a continued U.S. military involvement?" wrote Michael Shaw.

Richard Stengel, Time's managing editor, said he thought not. "The image is a window into the reality of what is happening -- and what can happen -- in a war that affects and involves all of us," he wrote in a statement on Time's Web site.

Bibi Aisha (bibi is an honorific; Aisha asked that her family name be withheld) makes an apt symbol of the excesses of the Taliban, and of Pashtun tribal society in remote parts of Afghanistan more generally. Her face, aside from the disfigurement, is as beautiful as that of the Afghan refugee girl whose cover photograph in National Geographic in 1985 became an iconic image of the country's plight.

At age 12, Aisha and her younger sister were given to the family of a Taliban fighter in Oruzgan Province under a tribal custom for settling disputes, known as "baad." Aisha's uncle had killed a relative of the groom to be, and according to the custom, to settle the blood debt her father gave the two girls to the victim's family.

Once Aisha reached puberty, she was married to the Taliban fighter, but since he was in hiding most of the time, she and her sister were housed with the in-laws' livestock and used as slaves, frequently beaten as punishment for their uncle's crime.

Aisha fled the abuse, but her husband tracked her down in Kandahar a year ago, took her back to Oruzgan, and on a lonely mountainside cut off her nose and both ears and left her bleeding. She said she still did not remember how she managed to walk away to find help.

In Pashtun culture, a husband who has been shamed by his wife is said to have lost his nose, Ms. Naderi explained; from the husband's point of view, he would have been punishing Aisha in kind.

American aid workers in Oruzgan Province took Aisha to the Women for Afghan Women shelter in Kabul, where at first she was too traumatized even to speak. They introduced her to a psychologist and gradually she recovered, learning to do handicrafts, but showing little interest in school work. Even before the Time cover appeared, the organization had found a benefactor in the Grossman Burn Foundation in Calabasas, Calif., which agreed to underwrite eight months of reconstructive surgery.

Once during Aisha's stay at the shelter, her father visited to try to persuade her to return home to her family, but she refused to do so. "I am still angry that they did this to me," she said. Still, she had hoped to call home to tell them that she was going to America, she said, but there was no cellphone coverage in the Taliban-dominated area she comes from.

Aisha dressed up for her last day in Kabul in a bright pink pantsuit with tassels and beads, and she hugged the other girls and women in the shelter. She said she was happy and excited to be going to America.

Promoted
Listen to the latest songs, only on JioSaavn.com
She changed into a more somber black gown for the trip to the airport and arranged her veil just below her eyes. Ms. Naderi lifted her 14-month-old baby onto her shoulder and they headed for the plane, Aisha holding her shirt as they walked. It is not, Ms. Naderi pointed out, a happy ending.

"Her 10-year-old sister is still there and we have no idea how she is," she said. "They're probably taking all of their anger out on her now, or even demanding another girl from her family to replace Aisha."