A stray emu bird was recently rescued by the sheriff's deputies in North Carolina that was "playing Frogger with traffic" on a busy highway. 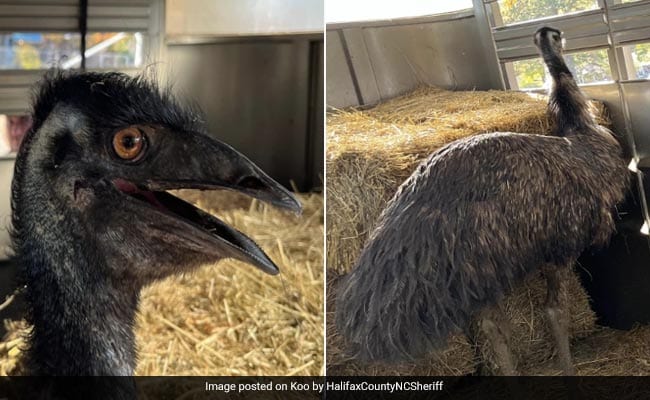 The emu had reached mile marker 171 by the time deputies arrived.

A stray emu bird was recently rescued by the sheriff's deputies in North Carolina that was "playing Frogger with traffic" on a busy highway. Halifax County NC Sheriff's Office shared a post on Facebook with pictures of that emu bird two days ago. According to the post, the emu's name is Limu.

The post also said that the emu had reached mile marker 171 by the time deputies arrived and was seen "playing Frogger with traffic," a reference to the classic video game in which a frog attempts to cross a busy road.

"Well, we helped Doug track down Limu today. It appears that saving on insurance was not on his mind. We received a call that an Emu was on the loose around mile marker 167 near I95. Before Animal Control and Deputies could arrive, this bird had made it to mile marker 171," the department wrote while sharing the post.

"Limu played Frogger with traffic travelling at a steady 35 mph. He then decided to stop and play at Chockoyotte park, but he couldn't fit in the swings. Eventually, we were able to capture Limu and return him to Doug. Hopefully, he's tuckered out and doesn't do this again," the department further said.

The emu made its way to Roanoke Rapids' Chockoyotte Park before being apprehended by deputies and returned to its owner.

After being shared, the post received hundreds of likes and shares. Several users expressed their concern about the emu's safety in the post's comment section.

One user wrote, "Great job. Thanks for caring and keeping this animal safe."

"So happy he's safe & no one got hurt," commented another.

Relating to the same incident, a third user wrote, "That same thing happened in Northampton Co. about 25 years ago; thing ran loose for 3-4 days before he was caught."