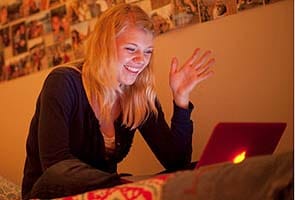 New York: Chantelle Welp and Colin Sorensen grew up together in Greeley, Colo. They despised each other in middle school, became friends junior year of high school and, in a twist of romantic irony, turned into a couple over Christmas vacation of their senior year -- just weeks before they learned of their very different college destinies.

Ms. Welp was accepted into her dream college, Suffolk University in Boston; Mr. Sorensen, the University of Colorado, Boulder. Initially, they fretted over their divergent paths. "I really wanted to try to make it work," says Ms. Welp. Ditto, Mr. Sorensen says.

So far, it has. Two years later, they are still seriously dating, cross-country. "In love, most definitely," Mr. Sorensen says.

Generations of high school sweethearts have stayed together into college, but the connection tends to unravel amid the charms of a new campus, often during the rite known as the Thanksgiving Break-up, or Turkey Drop.

That tradition -- and college dating over all -- is being tweaked, thanks to today's ability to communicate easily and variously across the miles. Relationships begun in high school and over summer vacations are continuing. Studying abroad isn't a deal-breaker. As long as they can Skype, text, send a BlackBerry message, post on Facebook and call at will, distance is no obstacle to love, or to long-distance sexual play.

"I used to hear a lot more that 'I don't want to deal with a long-distance relationship,' " says Mike Malmon, a psychologist and counselor at the College of Wooster in Ohio. "But there's been a transformation."

Take Ms. Welp and Mr. Sorensen. Last year, they Skyped for an hour or longer nearly every night. They texted constantly, talked on the phone and wrote letters (yes, snail-mail letters). Now, more confident in their relationship and squeezed by busy schedules, they Skype twice weekly and call a bit more than that. They send a stream of daily texts and see each other at home on break. For the past two Thanksgivings, Mr. Sorensen has flown to Boston, and later this year they plan to study abroad together in New Zealand. "I'm so reliant on being able to just check in with him and do video Skype conversations," Ms. Welp says.

Skype and similar technology figure large in this trend. "I don't know if we would be together without Skype," says Lisa Hoeynck, a University of Notre Dame junior, committed for the past three-plus years to Dusty Weber, a senior at St. Louis University. "Seeing his face makes our relationship even stronger," she says.

Ms. Hoeynck recently acquired an iPhone. "It's like Skype for your phone. When I'm walking to class I can talk and look at him."

But what students say they find most romantic is a handwritten letter. "There is nothing really romantic about getting an e-mail or a text," says Alia Roth, a Connecticut College freshman who has been dating Jake Blum, a University of Pennsylvania junior, since the end of her junior year in high school. "But there is something romantic about going to my mailbox and seeing a letter from my boyfriend and reading alone words from wherever he is," she says. "It was the action of thinking of me, wherever he was, removed from technology."

In return, Ms. Roth pens her own letters, sealing them with a lipsticked kiss.

Skype and Facebook also let students make contact with the other's roommates and friends. This virtual intimacy, say students, increases understanding of each other's lives. From Boston, Ms. Welp used Facebook to enlist four friends in her boyfriend's dorm to run a scavenger hunt for his 20th birthday. Each clue focused on a moment in their relationship: the dorm piano for a song Mr. Sorensen taught her there during a visit, for example; the prize, a special T-shirt. Mr. Sorensen feared his friends might laugh, but "they went along with it and enjoyed it just as much as she and I did."

IN the adjustment to college, first-year students often cling to high school sweethearts for security and for the history shared. For many, it's their first big relationship, making it harder to move on even as they grow apart.

Introverts tend to be clingier, says Suki Montgomery Hall, assistant director and psychologist in the Counseling and Wellness Center at Ithaca College. "Because," she says, "it's difficult for them to make new friends."

Stories abound of jealousy over comments posted on a boyfriend's Facebook wall or photos showing him dancing with someone else. A late response or poor word choice in a text can leave girlfriends stewing for hours about the state of their romance and asking friends and therapists to decipher a message's meaning.

"Most people aren't great at giving feedback through words, especially 19-year-old college boys," says Ms. Montgomery Hall. "All that data is creating some very anxious college students and a lot of fighting between partners."

And there's reason for worry. This is college, after all, and there's a cute guy in the next room. Sexting and Skype go only so far. When revealed, infidelities can be devastating.

"Freshmen can be more vulnerable to some of these things because they don't know where to get support or who their friend circle is," says Dawn LaFrance, associate director of counseling and psychological services at Colgate. Some students, she says, "haven't developed other friendships because they have devoted so much of themselves to the relationship."

Long-distance involvement keeps many from fully embracing their own campus. "Sometimes they don't feel that they are fully present at school because they are getting pulled back into the connections with the other person," says Jefferson Singer, a clinical psychologist and Connecticut College professor.

College administrators pride themselves on a vibrant, engaging campus life, and prefer students to start fresh, open to new experiences. "By nature we are that kind of school that precludes you from clinging onto the past," says Amy Uecke, associate dean of students for campus life at Lawrence University in Appleton, Wis. "A wise college president said: If you come to campus and you do four or five years here and find yourself leaving with only the same friends that you had in high school, we as an institution have failed you."

Some students skip parties or road trips with buddies. "I lost some friendships because of the constant struggle about where I spend my time and who I spend my time with," says Mr. Weber, who tries to weekend once a month with Ms. Hoeynck. Partly for that reason, Mr. Weber stopped managing the university's basketball team and began coaching an inner-city school basketball team that didn't travel for games. "It's not as glamorous," he says. "But it is fulfilling. You have to choose wisely."

Students, of course, are contrarian: they say that their long-distance relationships help them become more involved on campus. "We both wanted each other to have our own college experiences," says Liza Carens, a Connecticut College junior with a high school boyfriend now at Bucknell University, in Pennsylvania. She has a calendar of classes, theater rehearsals, gym visits, community service projects and a job.

"I don't think I would have the time for a relationship at my school," she says. Besides, she adds, "Having a long-distance relationship allows me to compartmentalize everything that I do."

Ilana Gershon, an assistant professor of communication and culture at Indiana University Bloomington, interviewed students for her recent book "The Breakup 2.0." She found that many were worried that a relationship on campus would deprive them of hours to study, work and make friends, whereas a faraway boyfriend or girlfriend wouldn't.

As for Ms. Welp and Mr. Sorensen, they are deeply engaged in their schools -- a bittersweet pleasure for Ms. Welp, who attributes her jam-packed schedule partly to her boyfriend. "Otherwise, you would drive yourself crazy thinking about how much you missed them and how much you want to be with them."
Comments
Long distance affairSkypeFacebook