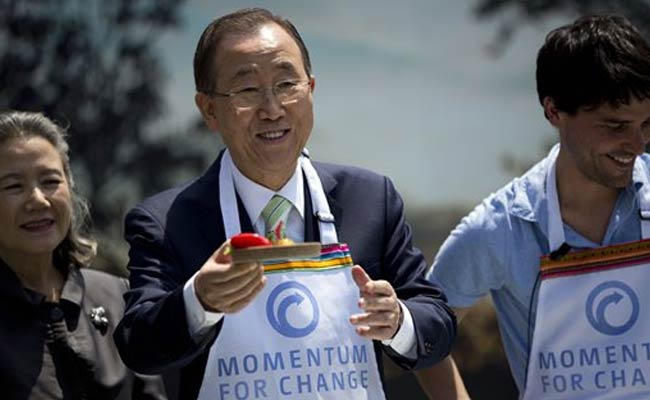 Lima: About 190 nations faced a crossroads on Friday on how boldly to fight global warming as United Nations talks in Lima went into overtime amid concerns that watered-down goals could undermine a UN climate summit in Paris next year.

Representatives at the talks, which opened on Dec. 1 with hopes for momentum following a climate deal last month between China and the United States, were split over issues including greenhouse gas cuts and new cash to help poor nations cope with a warming world.

"We are almost there," Peruvian Environment Minister Manuel Pulgar-Vidal told delegates. "I am sure we will find solutions." The talks had been due to end on Friday afternoon but were extended to last overnight.

Emerging nations such as China and India want the Lima gathering to stress that the rich will cut greenhouse gas emissions most, and pay for rising climate damage in vulnerable countries. The United States and the European Union want to ensure that poorer nations will also rein in rising emissions.

After Lima, governments are expected to outline national plans for cutting emissions beyond 2020 by an informal deadline of March 31, 2015, to form the building blocks of a global climate deal to be agreed in Paris in December 2015.

But options on the table in Lima range from obliging nations merely to publish a vague outline of their carbon plans on a U.N. website to making all provide detailed projections of emissions that will be reviewed by experts.

"There's the good, the bad and the ugly," said Alden Meyer, of the Union of Concerned Scientists, who said "ugly" would mean only vague action for Paris and "good" would be detailed accounts.

Under the deal announced with the United States last month, China has promised its emissions will peak around 2030, for instance, but may not give the exact numbers and opposes the idea of a review by other countries.

Marlene Moses of Nauru, chair of the Alliance of Small Island States, which fears rising sea levels and wants tough accounting, said that China was saying: "'We'll show you our cards but don't read them'.

"We are being asked to sign on to an agreement that puts us under water. That's not fair to us," she said.

And many developing nations also want the rich to map out far more clearly how they will raise aid to help the poor cut greenhouse gas emissions and cope with the impacts of climate change to a goal of $100 billion a year by 2020, agreed in 2009.

Promoted
Listen to the latest songs, only on JioSaavn.com
A draft text about finance only "invites" developed nations to give clarity about their plans.

This year is set to be the warmest on record, and scenarios by a U.N. panel of scientists indicate that the world should get on track to slash emissions to a net zero before 2100 to limit heat waves, floods and rising sea levels.
© Thomson Reuters 2014
Comments
United NationsLima talksUN climate summitUN COP20