Leading Philippines Presidential Contender: Gang Rape Victim 'So Beautiful' He Wishes He Had 'Been First' 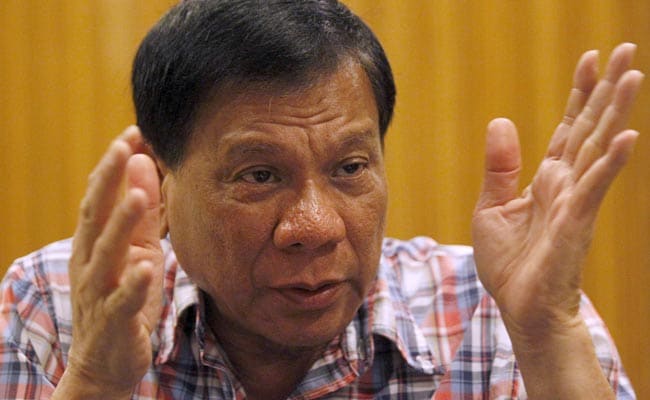 Rodrigo Duterte, mayor of Davao City, is a front-running candidate for president of the Philippines. (Reuters Photo)

"I was angry because she was raped, that's one thing. But she was so beautiful, the mayor should have been first. What a waste." The mayor to whom he was referring, by the way, is himself, Rodrigo "Digong" Duterte, mayor of Davao City on Mindanao in the Philippines.

That's the kind of dark, cruel joke most people would be embarrassed to tell (or even hear) in the privacy of their own homes, yet it's one that Duterte, a front-running candidate for president of the Philippines, said publicly.

A YouTube video showing the mayor making these statements recently surfaced and is causing an uproar even in a country accustomed to some raunchy politics. While the commentators have started referring to him as another Donald Trump, this guy makes Mr. Trump look like Mr. Rogers. Among the previous nicknames for Duterte are "the punisher" and "Duterte Harry," after the Clint Eastwood character Dirty Harry.

The video was shot during a campaign rally in Quezon City, Philippines, on April 12, CNN Philippines reported.

He's referring to an incident that took place during his first term as mayor in August 1989 at the Davao City Jail.

Inmates of the jail overpowered their guards and grabbed their weapons, taking 15 people, including 36-year-old Australian lay minister Jacqueline Hamill, hostage in 1989.

Hamill told Rev. Fred Castillo, another hostage who would later escape, that she had been raped by her captors.

They also slashed her throat.

As troops stormed the prison, killing 15 captors in a hail of gun fire, Hamill was shot in the neck and died.

"I looked at her face, son of a b---. She looks like a beautiful American actress . . . what a waste," the presidential candidate said, before making the aforementioned remarks about how he should have been first.

In a Facebook post on Monday, the Australian Embassy in the Philippines wrote, "Rape and murder should never be joked about or trivialised. Violence against women and girls is unacceptable anytime, anywhere."

They're not the only ones with strong words for Duterte.

In response, one of the Philippines opposing presidential candidates in the May 9 election, Manuel "Mar" Roxas II, said "anyone who laughs at the ultimate assault on the dignity of women should not be allowed to wield power," CNN Philippines reported.

Another candidate, Sen. Grace Poe, said, "It is distasteful and unacceptable, and reflects his disrespect for women. No one, whoever she is and whatever her looks may be, deserves to be raped and abused. Rape is a crime and no laughing matter. We should all be outraged at abuses against women," according to CNN Philippines.

Philippines Vice President Jejomar Binay took to Twitter to unabashedly state his discontent with Duterte: "You are a crazy maniac who doesn't respect women and doesn't deserve to be president."

Many users have tweeted about the mayor, tagging their tweets with "#RapeIsNotAJoke." One user tweeted, "When we make light of rape, we're empowering rapists and imply to victims that their situation shouldn't be taken seriously." Another tweeted, "I want a candidate who understands the responsibilities and accountabilities of the public office he/she is running for."

"#RapeIsNotAJoke he should've just shut his filty mouth instead of saying anything. Situations like that shouldn't be a joke," another tweeted.

Though the video shows the crowd laughing when he says this, Duterte denies allegations that it was said in jest. Instead, he admitted to having said it in 1989 and claims he was merely retelling the story at the rally.

"It was not a joke," he said, according to the Sydney Morning Herald. "I said it in a narrative. I wasn't smiling."

"I said it in the heat of anger," Duterte said. "I'm sorry in general. I'm sorry to the Filipino people, it's my style, it's my mouth, I said it in anger - listen to the story behind it."

Another person tweeted, "I'm sick and tired of his supporters spinning it. The issue is very simple: #RapeIsNotAJoke"

He once made a tourist swallow a cigarette butt for refusing to follow the city's smoking ban, Rappler reported. He has described himself unapologetically as a "womanizer," admitting to currently having three girlfriends and a common law wife, according to CNN Philippines. He has pledged to execute 100,000 criminals and feed them to the fish in the Manila Bay, Kicker Daily News reported.
Still, he's a front-runner.

"Duterte poses a grave challenge to the country's fragile democratic institutions," said two scholars writing earlier this month in the East Asia Forum. "He has promised to 'clean up the country' within six months and has threatened to abolish Congress or tame the courts if they try to stand in his way. The rapid rise of voter support for Duterte, despite his late entry into the race, highlights the pent-up anger among the lower-middle class at the deterioration of public order and concerns about growing drug abuse.

"Duterte's neo-authoritarian style, alongside 'anti-Imperial Manila' sentiments, has fueled his popularity, particularly in his birthplace of southern Mindanao. Duterte does not deny his poor human rights record - instead he brags about extrajudicial killings that he claims were necessary to pacify Davao," they wrote. "Along with his bombastic style and rough language - which is typical of a many local politicians but unusual in national politics - this cavalier attitude makes him a kind of Philippine version of Donald Trump," wrote Julio C. Teehankee of De La Salle University and Mark R. Thompson, of the City University of Hong Kong.

He projects "the look of somebody who could actually deliver on what people need, has that ability to connect with a certain group of the electorate," University of Asia and the Pacific's School of Law and Governance Professor Jeremy Gatdula told ABS-CBN News.

Whether that will be enough to elect him on May 9 remains uncertain, but his "joke" has stirred the ire of many Twitter users:

"We should make a strong statement to the whole world. Let us not elect this sick mayor! #NoToDuterte2016 #RapeIsNotAJoke"

"Presidential candidate, Mayor Rodrigo Duterte... I think I just lost all the respect I had for you. #sorrynotsorry #RapeIsNotAJoke"

(This story has not been edited by NDTV staff and is auto-generated from a syndicated feed.)
Comments
RodrigorapemayorPhilippines