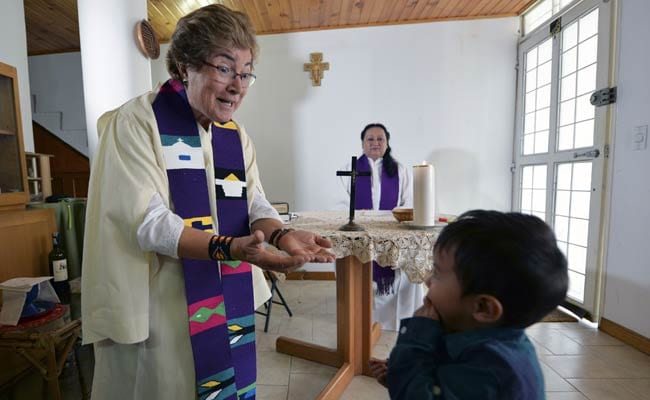 Olga Lucia Alvarez, a Colombian septuagenarian, says it is her vocation to be a Catholic priest, and she is not going to let gender or excommunication stop her from preaching the gospel.

Alvarez is the first Latin American to be ordained by the Association of Roman Catholic Women Priests (ARCWP), a US-based group dedicated to challenging the Church's policy against ordaining women.

Since she was ordained in Sarasota, Florida, in 2010 - prompting her automatic excommunication by the Vatican, which holds that such ceremonies violate Church doctrine - three other Colombian women have joined her, subverting traditional religious values in Latin America, the world's most Catholic region.

"They say only they are the representatives of Christ? There's no basis for that. We have all been created in the image of God. We are all equal," said Alvarez, 73.

"It's not about power. It's about service."

Dressed in a white cleric's robe with a purple stole, she celebrated mass on a recent Sunday at a house in the eastern hills of Bogota for about a dozen men and women.

Alvarez, a bespectacled woman with short brown hair that belies her age, grew up in the city of Medellin, where in 1968 Latin America's bishops held a historic conference seeking to transform the Church in the spirit of the Vatican II reforms.

Nearly five decades later, she says the Church has not gone nearly far enough with reforms.

"I respect the Eucharistic prayer. The rest has to sprout forth from the community," she told AFP.

She leads her congregation through Bible readings and traditional hymns, following the same script as Catholic churches worldwide.

But she does not deliver a sermon. Instead, Alvarez stands among her congregation in a circle instead of before them, and she takes communion last, not first.

The group prays in unison to what they refer to as the "all-powerful father and mother."

"She officiated at my wedding, she baptized my youngest son, she celebrated the oldest one's first communion. I trust her completely," he said.

Franco urged the Vatican to be "more open-minded" on the issue of women in the priesthood.

"I don't see any reason why a woman can't be a priest, a bishop or the pope," he said.

To the Vatican, however, the teachings of Jesus reserve the priesthood for men, and anyone giving the sacrament without the Church's blessing is automatically excommunicated.

"Groups like this aren't part of the Church," said Father Juan Alvaro Zapata, director of the Department of Ordained Ministries at the Episcopal Conference of Colombia, a country where three fourths of the population is Catholic.

"It's not as if women have to become priests to serve the lord. There are other ways to collaborate in building the kingdom in heaven."

Even Pope Francis, whose calls for change in the Church have won him the support of the Colombian women priests, has rejected any reconsideration of Vatican policy on ordaining women.

That has not stopped the ARCWP, whose first seven priests were ordained by a male bishop on the banks of the Danube River in 2002 and which now counts 210 female priests in 10 countries across Europe and the Americas.

The only in Latin America, however, are Alvarez and the three fellow Colombians who followed in her footsteps: Aida Soto, ordained in 2011, and Judith Bautista and Marina Sanchez, both ordained last year.

Promoted
Listen to the latest songs, only on JioSaavn.com
To Bautista, the movement is broader than just the issue of women clerics.

"I believe the spirit is called to a renewal, not only on women in the priesthood, but on inclusiveness in the Church," she told AFP.