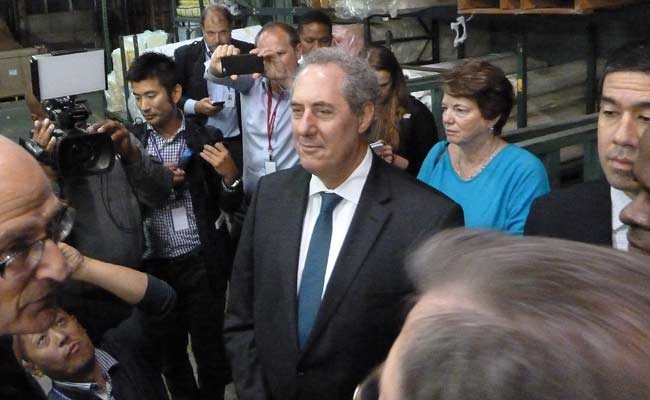 Trade ministers from 12 Pacific Rim countries seek to overcome grudging differences as they negotiate the final details of the ambitious Trans-Pacific Partnership. (AFP)

Atlanta: A dozen Pacific nations closed in on a sweeping free-trade pact on Sunday in Atlanta but failed to finalize terms on the fifth day of round-the-clock talks, dashing hopes raised by an earlier breakthrough on protections for new biotech drugs.

US officials, who are hosting the meeting, delayed a planned joint news conference until early Monday.

That pushed a resolution of the Trans Pacific Partnership (TPP) talks beyond the deadline set by Japan's economy minister Akira Amari. On Saturday, Amari had said the next 24 hours would be a make-or-break period for the talks.

After five years of negotiations, many officials had described this round as the best chance for an agreement, so failure to strike a deal in Atlanta would plunge the future of the talks into uncertainty.

Australian Trade Minister Andrew Robb said the delay on Sunday came as other TPP partners reviewed the proposed terms of a compromise on the monopoly period available for drug companies that develop new drugs known as biologics.

New Zealand negotiators also pressed on Sunday for greater access to overseas markets for its dairy exports, people involved in the talks said. "The thing that's missing is (an agreement) on dairy market access," one official said.

The sudden stall in the pace of talks came after organizers had set up a platform in the conference center decorated with flags of the TPP delegations for the announcement of a deal. By Sunday night, a U.S. government website that had been scheduled to livestream the ministerial news conference was carrying a banner saying "delayed pending further notice".

On Sunday morning, Amari said he had called Prime Minister Shinzo Abe to notify him that a deal was within sight.

The TPP would lower tariffs and set common standards for 12 countries that represent a combined 40 percent of the global economy.

US President Barack Obama has pushed for a deal as a way to open markets to U.S. exports, including financial services and pharmaceuticals. U.S. officials have also promoted the deal as a counterweight to China.

The issue of protections for new biologic medicines like Genentech's Avastin cancer therapy has pitted the United States against Australia and five other countries.

The United States has pushed for longer monopoly protections for pharmaceutical companies to encourage innovation. Australia has countered that such measures would strain national healthcare budgets and keep life-saving medicines from patients who cannot afford them.

The United States provides 12 years of exclusivity for biologic drugs. Australia has insisted on five years of protection to control healthcare costs.

A two-track compromise hammered out by Australia and the United States would set a minimum threshold of five years during which drug makers would have exclusive rights to clinical data behind new drugs while adding an additional protection of several more years as applications for competing drugs are reviewed, people involved said.

Under a second track, pharmaceutical companies would have eight years of exclusive rights to a new product outright in some countries, they said.

It was still unclear how that set of standards would influence pricing for future drugs. It was also unclear if other delegations, including Peru and Chile, would endorse the proposal.

Separately, the United States and Japan had reached agreement in principle on trade in autos and auto parts in talks that also included Canada and Mexico. That agreement is expected to give U.S. automakers, led by General Motors and Ford, extended tariff protection against low-cost pickup truck imports from Asia, people briefed on the talks have said.

But it would also give Japan's auto industry, led by Toyota Motor, a freer hand to source parts from Asia, including from plants outside the TPP-zone like China, on vehicles sold in North America.

A "rule of origin" would stipulate that only 45 percent of a vehicle would have to be sourced from within the TPP, down from the equivalent ratio of 62.5 percent under NAFTA, officials have said.

The announcement of a deal on Monday would mark the start of what could be a close-fought battle to ratify it in Congress.

Many Democrats and labor groups have raised questions about what the TPP would mean for jobs in manufacturing and environmental protections. Meanwhile Republicans, including Sen. Orrin Hatch, the powerful chairman of the Senate finance committee, have urged the administration to hold the line on intellectual property protections, including for drugs.
© Thomson Reuters 2015