Sheikh Sabah had earned a reputation as a shrewd, unshakeable leader who helped steer his country through the 1990 Iraqi invasion, crashes in global oil markets and crises in parliament and on the streets. 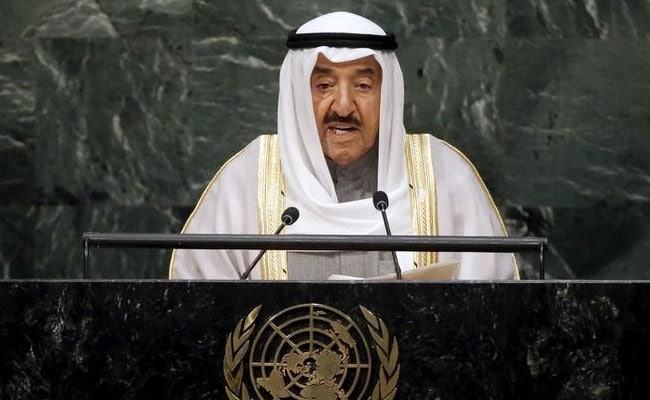 The emir had been receiving hospital treatment in the United States since July. (File)

Kuwait's emir Sheikh Sabah al-Ahmad Al-Sabah, the architect of the nation's modern foreign policy and mediator in some of the worst crises to grip the Gulf, died on Tuesday at the age of 91, the royal court announced.

Sheikh Sabah had earned a reputation as a shrewd, unshakeable leader who helped steer his country through the 1990 Iraqi invasion, crashes in global oil markets and crises in parliament and on the streets.

"With great sadness and sorrow, we mourn... the death of Sheikh Sabah al-Ahmad al-Jaber Al-Sabah, Emir of the State of Kuwait," said Sheikh Ali Jarrah Al-Sabah, minister in charge of royal affairs, in a televised statement.

State television had cut its regular programming and switched to a broadcast of Koranic recital before the announcement.

The emir had been receiving hospital treatment in the United States since July after undergoing surgery in Kuwait City.

No details have been disclosed on the nature of his illness or treatment, and the palace did not say where he died.

The emir, who has ruled the oil-rich Gulf state since 2006, had his appendix removed in 2002, two years after having a pacemaker fitted. In 2007, he underwent urinary tract surgery in the US.

Under Kuwaiti law, in the absence of the emir de facto power is passed to the crown prince, the late leader's half-brother Sheikh Nawaf al-Ahmad Al-Sabah, 83.

Sheikh Nawaf, an elder statesman who has held high office for decades including the defence and interior ministries, is now expected to be appointed the new ruler.

The 15th leader in a family that has ruled for over 250 years, Sheikh Sabah weathered Kuwait's crises with shrewd judgement and an iron fist.

As the country's top diplomat for nearly four decades, he fostered close ties with the West, most notably the United States which led the international coalition that freed Kuwait from Iraqi occupation in 1991.

He later emerged as mediator between the Gulf Cooperation Council and Iran, and between Saudi Arabia and Qatar following Riyadh's 2017 decision to cut ties with Doha.

Despite his advanced years, he remained deeply involved in global affairs.

"The loss of Sabah al-Ahmed will be felt deeply, both due to his prominent role as a diplomat and regional mediator and as a unifying figure at home," said Kristin Diwan of the Arab Gulf States Institute in Washington.

"Kuwaitis have appreciated his ability to keep the emirate out of regional conflicts and rivalries."

Major policy changes are not expected under his successor, even since Kuwait's Gulf neighbours, the United Arab Emirates and Bahrain, opted to normalise relations with Israel in a seismic shift.

"Kuwait's leadership will prioritise stability both on the domestic front and in regional politics. The focus will be on the home front," Diwan said.

"There will be a lot to manage domestically as parliamentary elections are expected in the next two months."

Normalisation with Israel is very unpopular with the Kuwaiti public, and there is significant support for the Arab world's historic position of insisting on a resolution of the Palestinian cause before giving diplomatic concessions to Israel.

"There is no indication a future leadership would want to change Kuwait's posture," Diwan said.

Kuwait's constitution stipulates that the ruler should be a descendant of the nation's founder, Mubarak al-Sabah, but the throne has alternated between the descendants of his sons, Salem and Jaber, for four decades.

However, contestants for the role of Crown Prince include Sheikh Sabah's son and former deputy prime minister Nasser Sabah al-Ahmed al-Sabah, who is a heavyweight of Kuwaiti politics.