Russian opposition figure Alexei Navalny risks being arrested on arrival, but he told reporters on board that he was "an innocent person". 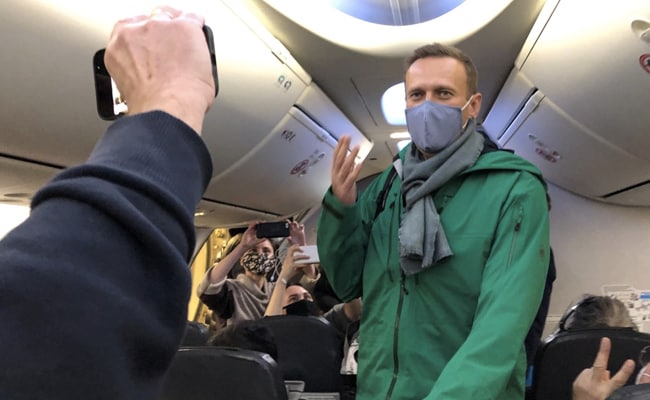 Russian opposition figure Alexei Navalny flew back to Moscow on Sunday after spending several months in Berlin recovering from a poisoning attack, risking arrest upon his return.

The plane is due to arrive at Moscow's Vnukovo airport around 7:30 pm (1630 GMT) and Navalny has encouraged supporters to meet him when he lands.

Speaking to reporters who crowded around him inside the aircraft, Navalny said he did not fear arrest.

"They will arrest me? That's impossible, I'm an innocent person," he said, wearing a face mask.

"I feel I am a citizen of Russia who has the full right to return to his home."

He expressed a "big thank you" to Germany and said he felt "very, very happy".

Navalny's wife Yulia was seated beside him on the flight.

The 44-year-old Kremlin critic fell violently ill on a flight over Siberia in August and was flown out to Berlin by medical aircraft in an induced coma.

Western experts concluded he was poisoned with a Soviet-designed nerve toxin, Novichok. Navalny has said he believes the attack was ordered by President Vladimir Putin.

The Kremlin has denied involvement.

Russia's prison service FSIN has said Navalny may face jail time when he arrives back in Moscow for violating the terms of a 2014 suspended sentence he was handed on fraud charges.

The anti-graft campaigner may also face criminal charges under a probe launched by Russian investigators late last year who say he misappropriated over $4 million worth of donations.

More than 2,000 people said in a Facebook event that they are planning to greet Navalny upon his return despite temperatures in Moscow hovering around -20 degrees Celsius (-4 degrees Fahrenheit).

Moscow prosecutors on Friday warned against participating in the "public event" planned at Vnukovo airport, saying it has not been authorised.

The airport told journalists that it will not allow media to work inside, citing coronavirus concerns.

Several activists in Saint Petersburg, who were travelling to greet Navalny, said police prevented them from continuing their journey.

Groups opposed to Navalny are also planning to show up at the airport.