Amid backlash from state lawmakers and teacher groups, Bevin said his comments were misunderstood by some but were damaging to others. 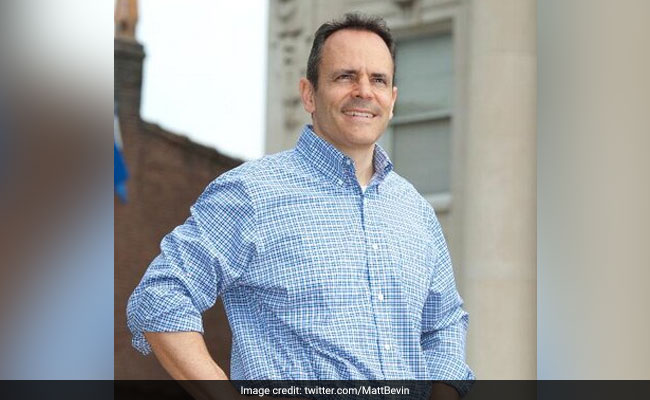 I apologize for those who have been hurt by the things that were said: Matt Bevin

Kentucky Gov. Matt Bevin apologized Sunday for saying protesting educators exposed some of the "hundreds of thousands" of children to sexual assault and drug use by walking out of class.

"I guarantee you somewhere in Kentucky today, a child was sexually assaulted that was left at home because there was nobody there to watch them," Bevin, a Republican, told reporters Friday evening after teachers swarmed the Capitol by the thousands over a battle to raise education funding in the state.

Amid backlash from state lawmakers and teacher groups, Bevin said his comments were misunderstood by some but were damaging to others.

"The words that people say can have unintended consequences," Bevin says in the video apology. "I apologize for those who have been hurt by the things that were said .. it was not my intent."

"I hurt a lot of people. Many people have been confused or hurt, or just misunderstand what I was trying to communicate," he added.

The response comes a day after the state's Republican-led House of Representatives approved a pair of resolutions condemning Bevin's comments - an act on the final day of the legislative session that the Associated Press described as "an extraordinary rebuke."

Bevin, whose veto of a two-year spending bill with a nearly half-billion-dollar tax increase was overridden by fellow Republicans in the legislature, has recently sparred with teachers groups amid educator protests across the country fueled by claims of low pay and underfunded school systems.

His office could not be reached for comment. Bevin's remarks did not appear to explain how or why teachers could be held accountable for what occurs among students outside the classroom, and he did not provide evidence of any crimes that were committed. Bevin has been Kentucky's governor since 2015.

"Children were harmed - some physically, some sexually, some were introduced to drugs for the first time - because they were vulnerable and left alone," he said on Friday.

Jefferson County Teachers Association President Brent McKim took issue with Bevin's remarks, noting that the protest amounted to just Friday and that more than 30 school districts participating in the demonstrations tried to give parents advanced notice about closures.

"The bottom line is that's one day. He was cutting hundreds of millions of dollars from kids that would impact every day, and that's what we were in Frankfort to stop," McKim said, according to the Courier-Journal. "We were there with the overwhelming support and encouragement of our parents who know that we care about every student in our classes."

Kentucky Education Association President Stephanie Winkler said she was "appalled" by Bevin's comment. "There is no rational comment I could make to that," Winkler said, the Courier-Journal reported.

Kentucky has become the latest flash point over the battle of school funding and higher pay that have led to recent teacher victories. West Virginia teachers walked out for nine days, forcing a 5 percent pay increase in March. In Arizona, protests and walkouts triggered Republican Gov. Doug Ducey's promise of a 20 percent raise by 2020. And in Oklahoma, Republican Gov. Mary Fallin raised teacher salaries by $6,100 and boosted funding by millions. But those figures fell well below teacher demands of $10,000 raises for teachers, $6,000 for support staff and $200 million for statewide funding.

The teachers in Kentucky have also protested against changes to the state pension system, among the worst-funded in the nation, the Associated Press reported. Education groups argue that less generous retirement funds may dissuade younger people from becoming teachers.

The teachers say it is important that they address the issues facing them, but inside and outside the classroom.

"I don't want to be out of my classroom. I want to be in my classroom instructing future citizens, but I'm afraid that spending at the state level is getting worse and worse, and we need those dollars for a 21st-century education," said Stephanie Ikanovic, a teacher of 21 years who participated in the demonstrations, the Associated Press reported.

Bevin decried the latest spending bill, which raises cigarette sales tax by half and increases sales tax on some consumer services, as "sloppy" and "non-transparent" in a Friday tweet, and believes the bill underestimates the cost of school funding needed. He vowed to call a special session "to pass a transparent and properly balanced budget" in a separate tweet.

The governor may face an uphill battle with lawmakers, even within his party, if the pressure campaign from teachers maintains its momentum.

"You can stand here all day and act like you are all for (education) until it comes time to pay for it. Well, that's a coward," said Kentucky state Rep. Regina Huff, a Republican middle school special-education teacher, the Courier-Journal reported. "We have to have this revenue to fund our schools."

(This story has not been edited by NDTV staff and is auto-generated from a syndicated feed.)
Comments
Matt BevinKentucky governorchild sex abuse