Up to four gunmen tried to enter the consulate but were intercepted by security guards at a checkpoint, senior local police official Javaid Alam Odho told news agency AFP. 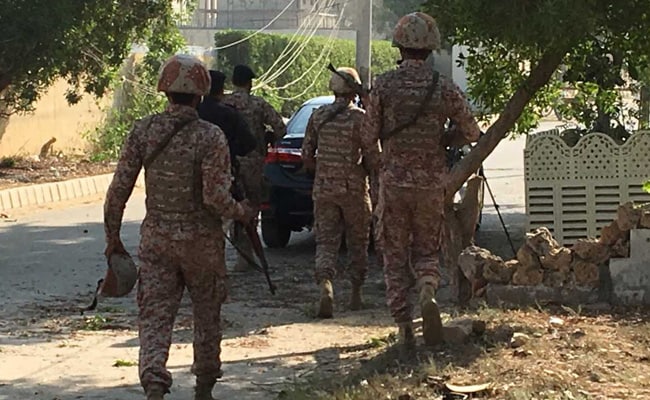 Paramilitary forces and police during an attack on the Chinese embassy. (Reuters)

At least two policemen were killed when unidentified gunmen stormed the Chinese consulate in the Pakistani port city of Karachi today, officials said. Up to four gunmen tried to enter the consulate but were intercepted by security guards at a checkpoint, senior local police official Javaid Alam Odho told news agency AFP.

An exchange of fire resulted "killing two of our constables and critically wounding another", he said.

He added that the group "ran away" but did not confirm if the attack was over, saying the area had been cordoned off and security forces were conducting a clearing operation.

Here are the highlights on Chinese Consulate Attack:

Nov 23, 2018 14:12 (IST)
Pakistan Prime Minister Imran Khan says both the attacks (on the Chinese consulate and in Pakistan's northwest) are part of a planned campaign to create unrest in the country by those who do not want Pakistan to prosper.
"Let there be no doubt in anyone's mind that we will crush the terrorists, whatever it takes," the PM tweets.

The failed attack against the Chinese Consulate was clearly a reaction to the unprecedented trade agreements that resulted from our trip to China. The attack was intended to scare Chinese investors and undermine CPEC. These terrorists will not succeed.

Nov 23, 2018 13:33 (IST)
India has condemned the attack on the Chinese consulate, saying there is no justification for such violence.
"The perpetrators of this heinous attack should be brought to justice expeditiously," the Indian Foreign Ministry said in a statement.
Nov 23, 2018 13:09 (IST)
China has said it "strongly condemns" Pakistan consulate attack.
"China strongly condemns any violent attacks against diplomatic agencies and requests that Pakistan takes practical measures to ensure the safety of Chinese citizens and institutions in the country," Chinese foreign ministry spokesman Geng Shuang says.
Nov 23, 2018 13:08 (IST)
All staff working in China's consulate in the Pakistani city of Karachi are safe, China's foreign ministry says.
The attackers did not enter the consulate compound, ministry spokesman Geng Shuang told a daily news briefing.
Nov 23, 2018 12:35 (IST)
Pakistani Prime Minister Imran Khan has ordered an inquiry into the attack.
"The Prime Minister has ordered a complete inquiry into the incident and has desired that elements behind this incident must be unearthed," PM Khan's office says in a statement, adding that the attack is part of a conspiracy aimed at undermining economic and strategic cooperation between the two nations.
"Such incidents will never be able to undermine Pak-China relationship," the statement adds.
Nov 23, 2018 12:07 (IST)
All 21 Chinese staff in the country's consulate are safe after an attack by suicide bombers and have been moved to a safer location, Pakistani Foreign Minister Shah Mahmood Qureshi says.
"The attackers couldn't hurt any of them, nor they could take hostage any of them," he adds.
Nov 23, 2018 11:41 (IST)
"There were three attackers and all three have been killed ... They could not even get in the compound. They tried to get into the visa section," police chief Amir Shaikh said, according to news agency Reuters.
Nov 23, 2018 11:38 (IST)
China, one of Pakistan's closest allies, has poured billions into the South Asian country in recent years as part of a massive infrastructure project that seeks to connect its western province Xinjiang with the Arabian Sea port of Gwadar.
The project, the China-Pakistan Economic Corridor, is one of the largest projects in Beijing's "One Belt One Road" initiative, comprising a network of roads and sea routes involving 65 countries.
Nov 23, 2018 11:33 (IST)
"There were three suicide attackers," Jiand Baloch of the Balochistan Liberation Army (BLA), which also describes itself as the Baloch Liberation Army, told Reuters.
The group has claimed responsibility for the attack.
"They stormed the Chinese embassy in Karachi. China is exploiting our resources," he said.
Nov 23, 2018 11:29 (IST)
Police and Rangers are on the scene, the police said.
Pictures posted to social media purportedly of the attack showed smoke rising from the area.

Heavy exchange of firing b/w armed men& security forces smoke coming out in what seems like a terror attack in the surroundings of Chinese Consulate, yards away from my seaview apartment, Clifton, Karachi. pic.twitter.com/Fv29s9i21h

Nov 23, 2018 11:26 (IST)
The attack has been claimed by a separatist militant group from Pakistan's southwestern province of Balochistan, which is at the centre of a major Chinese investment project in the country.
"We have carried out this attack and our action is continuing," the spokesman for the Balochistan Liberation Army (BLA), Geand Baloch, told AFP by telephone from an undisclosed location.
The BLA is just one of the militant groups operating in Balochistan, Pakistan's largest and poorest province, which is rife with ethnic, sectarian and separatist insurgencies.
Chinese consulate attackKarachi attackPakistan attack