From the "Fox & Friends" studio on Monday, Kallie Hapgood, a woman from Connecticut, pleaded for the president to intervene. She described her husband, Scott - a trader with UBS Investment Bank - as a "loving man" who "did nothing wrong." She added a dose of praise for Trump. 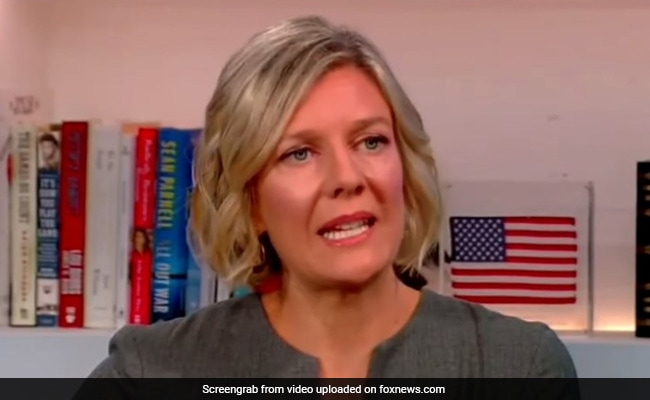 Kallie Hapgood's appeal seems to have worked; Trump tweeted that he would be "looking into" the case.

Kallie Hapgood wanted President Donald Trump's help in the case against her husband on the Caribbean island of Anguilla, where he's accused of killing a hotel maintenance worker while on a family vacation. So she turned to his favorite TV show.

From the "Fox & Friends" studio on Monday, the Connecticut woman pleaded for the president to intervene. She described her husband, Scott - a trader with UBS Investment Bank - as a "loving man" who "did nothing wrong." She added a dose of praise for Trump.

"We need help," she said during the five-minute segment. "I've seen Trump help Americans in peril around the globe, and we really need his help."

Hapgood's appeal seems to have worked. Not long after her appearance, Trump announced on Twitter that he would be "looking into" the case - another instance of the president involving himself in a criminal case outside of U.S. jurisdiction.

It was reminiscent of Trump's intervention in Sweden's arrest of A$AP Rocky. The president made repeated calls for the country to release the American rapper after his June 30 arrest on assault charges, even suggesting that race was a factor in his arrest. Trump's attempts to influence the Swedish case caused a minor diplomatic spat with the country, a U.S. ally.

Ultimately, Rocky was released after his trial ended Aug. 2. He was found guilty but avoided a prison sentence. To the Trump administration's displeasure, the rapper did not bother to thank the president for his efforts, according to a Yahoo News account of the saga.

The young employee's death - and the treatment of the man accused of killing him - sparked outrage on the tiny, 15,000-population island, where the economy is dependent on tourism. Some residents believe Hapgood has been treated favorably, perhaps due to his status as a wealthy tourist, The New York Times reported. He was released from prison hours after his arrest and allowed to board a plane and return to the U.S.

At the time of the incident, the Hapgood family was a day into their spring break stay at a five-star resort called Malliouhana. Scott Hapgood, 44, was in the family's room with two of his children when he heard a knock at the door, Kallie Hapgood said on "Fox & Friends."

"Somebody in hotel uniform said, 'I'm here to fix a leak in the sink,'" she said. "And my husband said, 'We don't have any leaks in our sink, but come on in.'"

Once in the room, Mitchel pulled out a knife and demanded money, Kallie Hapgood said. Her husband, a onetime Dartmouth football player, has acknowledged that he overpowered the smaller man and pinned him to the floor until the police showed up. He told The New York Times it was a "hard struggle," during which he was stabbed and bitten.

A bellman who arrived in the hotel room before the police told the newspaper that Mitchel seemed to be struggling for air as Scott Hapgood held him down. The worker, Geshuane Clarke, said Scott Hapgood refused to release Mitchel before authorities arrived, insisting that the trapped man was breathing. Clarke claimed Mitchel tried to speak, but Scott Hapgood told him, "You don't have a thing to say."

Mitchel died soon after. A coroner ruled that the cause was asphyxiation from the struggle, and the American banker was charged with manslaughter. Amid the uproar that followed, Anguilla police warned the accused killer that they could not guarantee his safety, according to The New York Times.

Months later, a revised autopsy report obtained by the New York Times derailed the original account of Mitchel's death. The new report said it may have happened not as a result of the altercation in the hotel room but rather from a cocaine overdose. The change was based on newly released toxicology tests that showed Mitchel had a lethal level of the drug in his system.

Yet the criminal case remains ongoing. Asked why that is, Kallie Hapgood told "Fox & Friends" hosts Steve Doocy and Ainsley Earhardt: "It's a great question and it's why I'm here. We need help." She said her husband, who has returned to the island three times for court proceedings, is "an amazing father" and "doesn't deserve this."

"Trump, I've seen him do amazing things for Americans," she said. "And Scott Hapgood is the type of American you want to help."

Trump apparently agreed. In his tweet about the case, he wrote, "Will be looking into the Scott Hapgood case, and the Island of Anguilla. Something looks and sounds very wrong. I know Anguilla will want to see this case be properly and justly resolved!"

He tagged "Fox & Friends," Earhardt and a man named Steve Ducey (who tweeted that Fox News viewers "mistakenly tag me a lot, just not... this fox news viewer.")

Later Monday, Kallie Hapgood said the family had not yet heard from the president, the Stamford Advocate reported. But, she said, they were "so thrilled" he was interested in the case.

(Except for the headline, this story has not been edited by NDTV staff and is published from a syndicated feed.)
Comments
Kallie HapgoodDonald Trump