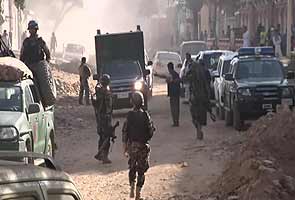 Kabul: A series of explosions and gunfire was today heard outside the presidential palace in Kabul, one of the most heavily guarded areas in the Afghan capital. The Kabul police confirmed the militant attack which erupted at one of the gates of the complex began at about 6:30 am.

The Taliban claimed responsibility for the attack. In a text-message statement to reporters, the Taliban said, "We brought death to the enemy."

Reporters gathering for an event early on Tuesday with President Hamid Karzai counted at least a half dozen explosions outside the eastern gate of the palace. Small arms fire also could be heard.

Smoke rose from the eastern gate of the palace after the explosions and at least 45 minutes of on-and-off small arms fire.

"The attack occurred at the entrance that is near the ministry of defence," said a police officer. The area houses many official buildings including the US Embassy and the headquarters for the NATO-led coalition forces.

Police said that three or four attackers had approached one entrance to the sprawling palace area and had fled their explosives-laden car before detonating it.

Kabul police chief Mohammad Ayoub Salangi told reporters at the scene that all the militants had died and no security forces personnel or civilians were killed in the attack, giving no further details.

News Agency AFP quoted a source from the presidential palace as saying that the premises had not been breached.

The US embassy sounded its "duck and cover" alarm drill and the US-led NATO military coalition said on its Twitter account: "Small arms fire and multiple explosions reported in Kabul. Situation developing."

The last major attack in Kabul was on June 11 when the Taliban insurgents claimed responsibility for a suicide car bomb outside the Supreme Court that killed at least 15 civilians.

Tuesday's attack came during a visit to Kabul by US envoy James Dobbins after a diplomatic bust-up over the Taliban's new office in Qatar that was intended as a first step towards a peace deal to end 12 years of fighting in Afghanistan.

The Qatar office used the formal name of "Islamic Emirate Of Afghanistan" from the rebels' 1996-2001 government, and flew the white Taliban flag that is seen by many Afghans as a grim reminder of the cruelties of Taliban rule.

President Hamid Karzai, furious over the flag and sign, broke off ongoing Afghan-US talks on an agreement that would allow Washington to maintain soldiers in Afghanistan after the NATO combat mission ends.

Promoted
Listen to the latest songs, only on JioSaavn.com
Karzai has so far declined to send representatives to Qatar, but pressure is growing for a ceasefire and eventually a peace settlement ahead of next year's NATO withdrawal and Afghan presidential elections due to April.