"Justice For The Dead" Sought 5 Years After MH17 Crash 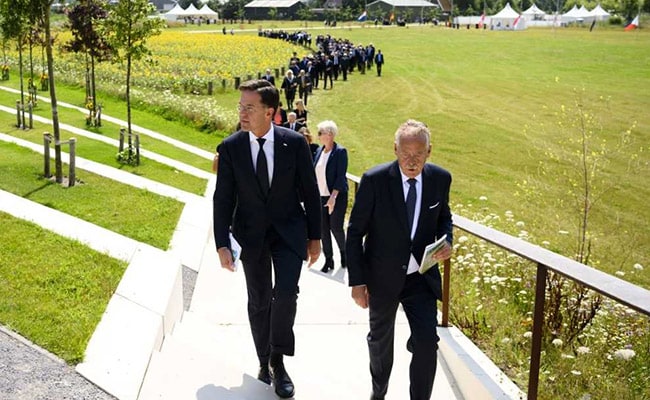 Families of the victims of flight MH17 on Wednesday marked five years since the crash, with calls for justice for those killed when the Malaysia Airlines plane was shot down over war-torn eastern Ukraine.

The remembrance services in the Netherlands and Kuala Lumpur came less than a month after international investigators charged three Russians and a Ukrainian with the murder of the 298 people who died.

Mourners gathering at the Dutch national monument to the disaster were surrounded by 298 trees -- one was planted for each victim -- and sunflowers grown from seeds from the Ukrainian fields where the wreckage fell.

Dutch Prime Minister Mark Rutte said the "grief is felt all over the world today" as he addressed relatives at the memorial in Vijfhuizen, next to Amsterdam's Schiphol Airport where the ill-fated Boeing 777 to Malaysia took off on July 17, 2014.

"Justice for the dead remains our common goal," Rutte said in a speech.

"Fortunately, last month we were able to take a new and important step forward. We're not there yet, but step by step we're getting closer to the truth."

The service also featured music, singing and a recital by young people.

The flags of the victims' countries hung at half-mast. One hundred and ninety-six of the victims were Dutch and 36 were Australian.

'Justice Will Be Done'

In Kuala Lumpur, there was a minute's silence at the Australian embassy with some Malaysian relatives of those on board.

A Dutch-led team of international investigators says the plane was shot down by a BUK anti-aircraft missile over part of eastern Ukraine that was held by pro-Russian rebels.

They say the missile originated from the Russian military's 53rd anti-aircraft missile brigade based in the city of Kursk and was transported there before the tragedy.

The Netherlands and Australia have said that they hold Russia responsible for the shooting down of MH17.

Investigators on June 19 charged four people -- Russians Igor Girkin, Sergei Dubinskiy and Oleg Pulatov, and Ukrainian Leonid Kharchenko -- with murder. All are linked to the separatist rebels in eastern Ukraine.

Russia has denied all involvement and Russian President Vladimir Putin has said the probe showed "no proof" of Moscow's guilt.

"We do not consider this investigation objective. Russia offered its participation and to work together since the start to find who was responsible for this horrible tragedy," Kremlin spokesman Dmitri Peskov said Wednesday.

Australian PM Scott Morrison said in a tweet that his government "remains resolute in holding those responsible for this appalling incident to account.

"Australia has not forgotten that terrible day, we stand firm for the justice that the victims and their families deserve," he added.

"The EU calls on Russia to accept its responsibility and cooperate fully with the ongoing investigation," she said in a statement.

"The EU expresses its full confidence in the independence and professionalism of the legal procedures that lie ahead."

Dutch Foreign Minister Stef Blok meanwhile said he was "thankful for the worldwide support for our joint efforts... to achieve justice. We will keep going".

However Malaysia's support for the probe into the shooting down of its own flag carrier's plane has been called into question after its Prime Minister Mahathir Mohamad called the charges against Moscow "politically motivated".