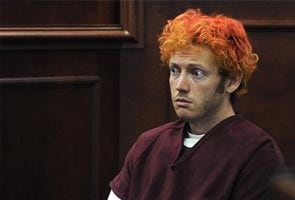 Colorado: A judge on Tuesday accepted a plea of not guilty by reason of insanity from the suspect in the deadly Colorado movie theater shooting, setting the stage for a lengthy mental evaluation. The examination could be a decisive factor in determining whether the suspect James Holmes is convicted and sentenced to die.

James Holmes, a former graduate student, is accused of opening fire in a packed Denver-area movie theater last summer, killing 12 people and injuring 70. He is charged with multiple counts of murder and attempted murder, and prosecutors are seeking the death penalty.

The July 20 massacre was one of several mass shootings that jolted the U.S. debate over gun violence, and it helped prompt Colorado to adopt significant statewide gun control laws this year.

At Tuesday's hearing, the court clerk placed a written advisory of the ground rules of the plea before Holmes so he could examine it as Judge Carlos Samour Jr. read through all 18 points.

When Samour asked if he had any questions, Holmes replied no in a clear, firm voice. Samour then accepted the plea.

Samour also determined prosecutors can have access to a notebook that Holmes sent to a psychiatrist before the rampage.

Holmes' lawyers repeatedly have said he is mentally ill, but they delayed the insanity plea while arguing state laws were unconstitutional. They said the laws could hobble the defense if Holmes' case should ever reach the phase where the jury decides if he should be executed.

Samour on Tuesday ordered Holmes to undergo a mental evaluation at a state hospital, but it could be a while before that happens. Doctors want to review the 40,000 pages of evidence in the case first. Samour set a tentative date of Aug. 2 for Holmes' evaluation to be completed but indicated he would grant more time if doctors want it.

Court officials also released nearly 100 pretrial motions Tuesday, most of them from the defense.

One signaled that Holmes will seek a change of venue because of pretrial publicity. Others challenged the admissibility of ballistics, handwriting and mountains of other evidence and demanded that prosecutors hand over as many as 2,000 pieces of physical evidence.

Holmes' lawyers appear to be trying to humanize their client, who made his first court appearances with a mop of dyed orange hair. They filed motions asking that he be allowed to appear before jurors in civilian clothes, instead of a jail uniform, and without shackles. They also asked that authorities ratchet back courthouse security, including armed guards on the roof.

Marcus Weaver, who was wounded and lost his friend Rebecca Wingo in the shooting, doesn't believe Holmes is insane but is grateful the case is moving forward.

"As we've seen evidence and seen the case unfold, it's become more evident that Mr. Holmes did what he did, and it had nothing to do with his mental state," he said.

The insanity plea is widely seen as Holmes' best chance of avoiding execution, and possibly his only chance

Hundreds of people were watching a midnight showing of "The Dark Knight Rises" at the Aurora theater when the shooting occurred.

The dead included a Navy veteran who threw himself in front of his friends to shield them, an aspiring sports journalist who had survived a mall shooting just two months earlier, and a 6-year-old girl.

Prosecutors say Holmes spent months buying weapons, ammunition and materials for explosives and scouted the theater in advance. He donned police-style body armor, tossed a gas canister into the seats and opened fire, they say.

The insanity plea is widely seen as Holmes' best chance of avoiding execution, and possibly his only chance, given the weight of the evidence against him.

But his lawyers delayed it for weeks, saying Colorado's laws on the insanity plea and the death penalty could work in combination to violate his constitutional rights.

The laws state that if Holmes does not cooperate with doctors conducting a mandatory mental evaluation, he would lose the right to call expert witnesses to testify about his sanity during the penalty phase of his trial. Defense lawyers argued that is an unconstitutional restriction on his right to build a defense. They also contended the law doesn't define cooperation.

Colorado law defines insanity as the inability to distinguish right from wrong caused by a diseased or defective mind.

If jurors find Holmes not guilty by reason of insanity, he would be committed indefinitely to the state mental hospital. He could eventually be released if doctors find his sanity has been restored, but that is considered unlikely.

If jurors convict him, the next step is the penalty phase, during which both sides call witnesses to testify about factors that could affect why Holmes should or shouldn't be executed.

Promoted
Listen to the latest songs, only on JioSaavn.com
The jury would then decide whether Holmes should be executed or sentenced to life in prison without possibility of parole.