Joe Biden and his wife, Jill, both wearing black and with black face masks, first met far from the cameras with relatives of the dead in a special family center at Dover Air Force Base in Delaware. 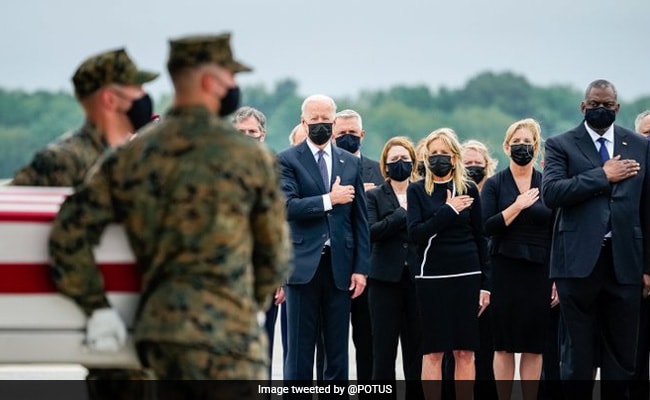 In a silence broken only by the sobs of bereaved families, Joe Biden stood Sunday, hand over his heart, to pay tribute as the remains of the US service members killed in the Kabul bombing attack were transferred from a military C-17 cargo plane to a closely parked row of gray hearses.

In a jolting juxtaposition, the grim rite played out even as Biden faced the fiercest criticism of his presidency over his handling of the exit from Afghanistan.

The moving ritual played out on the tarmac of Dover Air Force Base in Delaware, with Biden and his wife Jill standing somberly to the side as specially trained white-gloved military crews, stepping softly and in perfect unison, transferred the remains in special metal cases to the waiting hearses.

The 13 service members that we lost were heroes who made the ultimate sacrifice in service of our highest American ideals and while saving the lives of others. Our sacred obligation to the families of these heroes will last forever. pic.twitter.com/lPx4a4ebS7

Defense Secretary Lloyd Austin, Secretary of State Antony Blinken and other military officers and dignitaries were part of a small group joining Biden, all in black masks.

Under a heavy gray sky, family members stood at a distance, protected from the glare of cameras.

The Dover base, on the US East Coast about two hours from Washington, is synonymous with the painful return of service members who have fallen in combat.

Meeting the remains of fallen service members at Dover is considered one of the most solemn duties of a US president.

Biden, during a speech on Hurricane Ida later Sunday in Washington, DC called the soldiers -- some of whom were aged just 20, the length of the war in Afghanistan -- "heroes."

"Let's keep them in our prayers," he said, declining to take further questions on Afghanistan.

For Biden -- whose late son Beau Biden served in Iraq -- the loss must have been particularly painful.

In addition to the 13 American service members, more than 100 Afghans died in the Kabul airport attack Thursday, blamed on a regional arm of the Islamic State.

The US has since launched at least two drone strikes on Islamic State targets, including one Sunday against a vehicle said to be threatening the Kabul airport.

The chaotic US withdrawal from Afghanistan -- some 114,000 people have been flown out of the country since the Taliban takeover -- has also left Biden facing scorching criticism, particularly from Republicans.

About 48 hours from the US deadline for evacuations, Blinken said that the United States was working tirelessly to evacuate Americans who want to leave.

Approximately 250 US nationals remain in Afghanistan, according to a State Department spokesperson. Some 280 others have self-identified as Americans but not yet decided whether they want to leave, the spokesperson said.

Those who chose to stay "are not going to be stuck in Afghanistan," National Security Advisor Jake Sullivan told Fox News Sunday.

"Joe Biden put our forces at risk by having no plan for how to evacuate," said a visibly angry Sasse, who serves on the intelligence committee. "We are absolutely at risk. And we are at risk because the president has been so unbelievably weak."

He called an earlier interview with Blinken "disgusting."

And Mitch McConnell, the Senate Republican leader, told Fox that Biden's withdrawal plan was "one of the worst foreign policy decisions in American history -- much worse than Saigon because after we left Saigon there weren't Vietnamese terrorists who were planning on attacking us here at home."

He added: "I fear for the future."