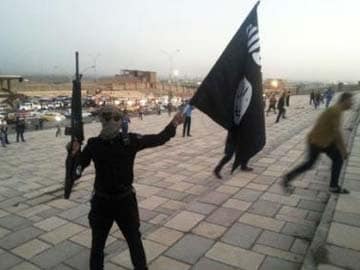 A fighter of the Islamic State of Iraq and the Levant (ISIL) holds an ISIL flag and a weapon on a street in the city of Mosul.

Mosul, Iraq: Jihadi militants have taken over a monastery in northern Iraq, one of the country's best-known Christian landmarks, and expelled its resident monks, a cleric and residents said on Monday.

Islamic State (IS) fighters stormed Mar (Saint) Behnam, a 4th century monastery run by the Syriac Catholic church near the predominantly Christian town of Qaraqosh, on Sunday, the sources said.

"You have no place here anymore, you have to leave immediately," a member of the Syriac clergy quoted the Sunni militants as telling the monastery's residents.

He said the monks pleaded to be allowed to save some of the monastery's relics but the fighters refused and ordered them to leave on foot with nothing but their clothes.

Christian residents from the area told AFP the monks walked several miles along a deserted road and were eventually picked up by Kurdish peshmerga fighters who drove them to Qaraqosh.

The Syriac cleric said five monks were expelled from Mar Behnam. Christian families in the area said there may have been up to nine people living at the monastery.

The incident was the latest move by the Islamic State, which last month declared a "caliphate" straddling large swathes of northern Iraq and Syria, to threaten a Christian presence in the region spanning close to two millennia.

Over the weekend, hundreds of families fled Mosul, a once-cosmopolitan city which is the country's second largest and lies around 15 kilometres (10 miles) northwest of Mar Behnam.

They abandoned homes and belongings after IS fighters running the city issued an ultimatum for Christians to convert, pay a special tax, leave or face the sword.

Families who were forced on the road and leaders of Iraq's Chaldean and other churches said Mosul was now emptied of Christians for the first time in history.

Jihadi fighters want to create a state based on an extreme interpretation of sharia -- or Islamic law -- and have targeted all minorities in the Mosul area.

Other groups such as Shiite Turkmen, Shabak and Yazidis have suffered even more than the Christians, who have largely escaped summary executions since IS swept the region in early June.

Promoted
Listen to the latest songs, only on JioSaavn.com
Mar Behnam is a major Christian landmark in Iraq and a site where the local community and pilgrims traditionally pray for healings and fertility.

It was built by Assyrian king Sennacherib II as a penance for having his children Behnam and Sarah killed because they had converted to Christianity.