Jay Leno was working on a steam engine underneath a car in his garage when a fire began. He was saved by a friend. 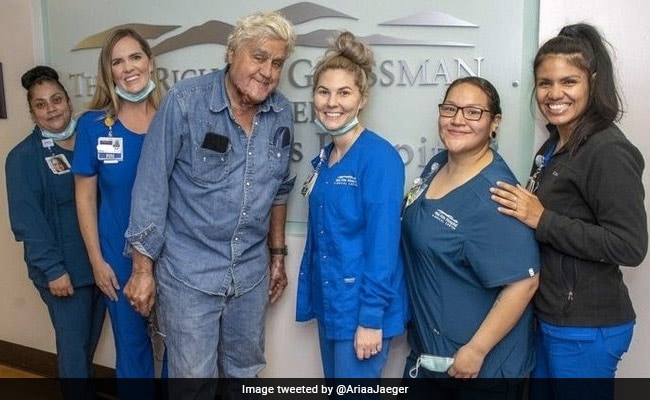 Jay Leno posing with the hospital staff after being discharged.

American television presenter and comedian Jay Leno, who suffered third-degree burns after his car caught fire, was discharged from hospital on Monday. Mr Leno looked happy and posed with the staff of the Grossman Burn Center after recovering from serious burns, as seen in the photos released by the hospital. He was injured after a 115-year-old car burst into flames in his Los Angeles garage. He was rescued by a friend. The 'Tonight Show' host underwent multiple surgeries - one of them a "grafting procedure".

"After a 10-day stay at the facility, Jay will receive follow-up care at the Grossman Outpatient Burn Clinic for burns to his face, chest and hands he received during a fire at his home garage," the hospital said in a press release.

"Jay would like to let everyone know how thankful he is for the care he received, and is very appreciative of all of the well wishes. He is looking forward to spending Thanksgiving with his family and friends and wishes everyone a wonderful holiday," the release further said.

Mr Leno was working on a steam engine underneath a car in his garage when a fire began. He was pulled from underneath the car but suffered "significant" burns to his face, chest and hand. The comedian credited his friend Dave with saving him after he was set on fire, as he was standing nearby and immediately jumped on him to smother the flames.

Mr Leno hosted 'The Tonight Show' from 1992-2009 when he was replaced by Conan O'Brien, a deal that had been in the works for five years, and the comedian moved to 10pm with 'The Jay Leno Show'. Both programmes suffered from lousy ratings, resulting in NBC's infamous decision to reinstate Mr Leno as "The Tonight Show" host which he then continued till 2014.