Officials said last week that the heatwave had killed at least 15 people and forced the hospitalisation of over 12,000 others in July. 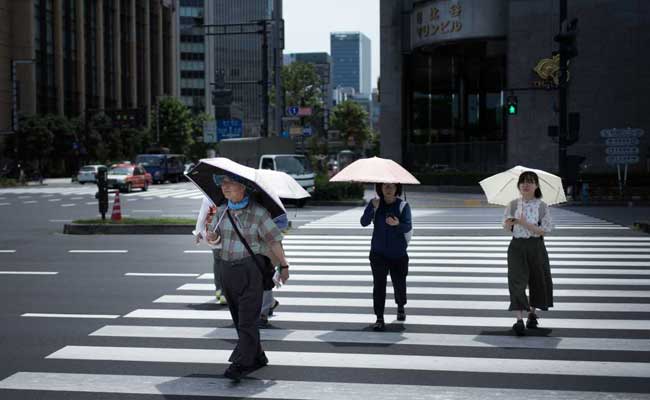 11 people died due to the sudden surge of heat in Japan.

Officials said last week that the heatwave had killed at least 15 people and forced the hospitalisation of over 12,000 others in the first two weeks of July.

But the death toll may be more than double that, with Kyodo News agency reporting 11 people died on Saturday alone across Japan.

An updated official toll is expected later this week.

The heatwave has toppled temperature records across the country, with Kumagaya in Saitama outside Tokyo setting a new nationwide record on Monday with temperatures hitting 41.1 Celsius (106 degrees Fahrenheit).

And in western Tokyo's Ome, temperatures hit 40.3 degrees Celsius, the first time temperatures over 40 have been recorded in Tokyo's metro area.

Records fell at 13 other observation stations across the country, with more than a dozen cities and towns seeing temperatures around 40, the Japan Meteorological Agency said.

"People in areas where temperatures are as high as 35 degrees or higher should be extremely careful" to avoid heatstroke, meteorological agency official Minako Sakurai told AFP.

"And at even lower temperatures, the heat can be dangerous for small children and elderly people, and depending on the environment and activities you are doing," she warned.

"People should be all the more careful as many people must be exhausted after days of cruelly hot weather," she added.

Japan's disaster management agency has urged people to use airconditioning, drink sufficient water and rest often while at work.

The heatwave follows record rainfall that devastated parts of western and central Japan with floods and landslides that killed over 220 people.

Japan's summers are notoriously hot and humid, and hundreds of people die each year from heatstroke, particularly the elderly in the country's ageing society.

But this year's record temperatures have surprised residents and officials alike, and revived concerns about the 2020 Summer Olympics, which will be held in July and August in Tokyo.

Olympic officials and Tokyo's local government are touting measures from solar-blocking paint on roads to mobile misting stations to tackle the heat.