He Was Live-Streaming His Mt. Fuji Climb, Then The Sound Of His Fall

The video shows a camera's eye-view of the ascent, with the climber panting as he said: "I'm rushing to the peak." 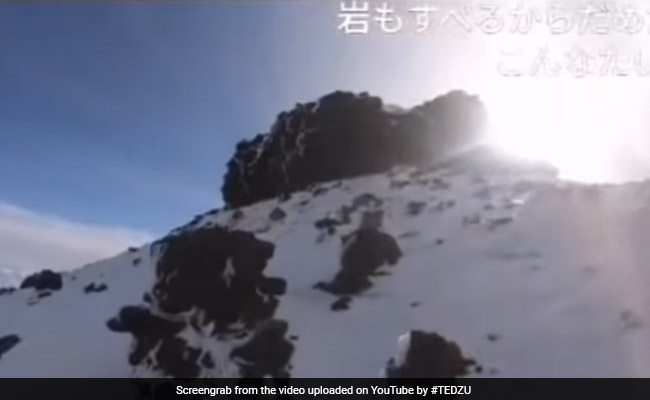 The sound of his slide can be heard on the video, along with a jumble of images.

A man's body has been found on Mount Fuji, Japanese media reported on Wednesday, two days after a climber live-streaming a solo winter ascent of the mountain was seen dramatically falling and sliding down a snow-clad slope.

Although more than 300,000 people walk up Japan's iconic mountain every year, authorities say it is prohibited to do so in the winter. That didn't stop a climber, calling himself TEDZO, from live-streaming his attempt to reach the summit of the nation's highest peak on Monday afternoon.

The video shows a camera's eye-view of the ascent, with the climber panting as he said: "I'm rushing to the peak."

He complains repeatedly about his cold hands, which he tries to warm, at point saying he has stuck them under his arms.

"My fingers are losing sensation. I wish I had brought a smartphone holder. It's in my pocket," he said. "My fingers are killing me. Let's warm them up."

Then the path becomes narrower, with a fence on the left, before sloping down.

"Here are rocks. We can follow the rocks. It's pretty dangerous. I can climb down by sliding," he said. "It's steep. The path is covered with snow . . . Am I on the right path? I'm slipping! Here it's also dangerous with this slope."

Finally, he said only "slipping."

The sound of his slide can be heard on the video, along with a jumble of images including his boots, climbing poles, and a smartphone before it ends in a freeze frame of the snow, rock and part of a blue pole.

In the video, a woman's voice can also be heard, but it seems to be coming from his phone.

Police sent a helicopter to look for the climber, while a 10-member rescue team began scouring the area on Tuesday morning, finding signs of a fall that day but no body.

Now police from Shizuoka prefecture say they have found a body but have not yet identified it, NHK reported.

The climbing season for the 3,776-meter (12,388-foot) peak ended on Sept. 10, with the official website advising that trails and huts are closed after this date and it is "very dangerous" to climb the mountain during this period.

The U.S. Embassy says that some climbers nevertheless attempt to climb the mountain during the offseason, adding that every year, "a number of climbers - including Americans - are killed while attempting to climb Mount Fuji."

In August, a Russian woman was killed by a falling rock.

Akiko Kashiwagi contributed to this report.

(Except for the headline, this story has not been edited by NDTV staff and is published from a syndicated feed.)
Comments
Mount FujiJapanese climber