Japan to Export Robot Cat Doraemon to US: Network 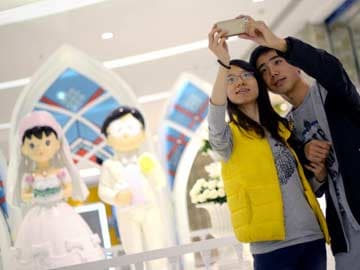 Tokyo: One of Japan's most popular cartoon creations, Doraemon, a robot cat from the future with a magic pocket and a portal to anywhere, is to make his debut on US TV this year, officials said Friday.

TV Asahi, which partially owns the rights to the character, has reached an agreement with Disney to air a version dubbed into English, said a spokeswoman with the Japanese broadcaster.

The cartoon has been broadcast in Japan for decades and has captivated children across Asia, but it will be his first foray in English into the American market, she said.

The US media giant is to air 26 episodes of the animation, amending story lines, character names and gadgets to suit US viewing tastes.

Doraemon, a dumpy blue feline with a round head, was sent back in time from the 22nd century by a young boy who wanted to change his family's fortunes.

His magic pocket provides an endless supply of fantastical gadgets that help his young friend Nobita Nobi navigate the trials of everyday life.

Promoted
Listen to the latest songs, only on JioSaavn.com
Created by artist Fujiko F. Fujio, the character first appeared in manga strips in 1969, making the transition to small and big screen over the following decades.