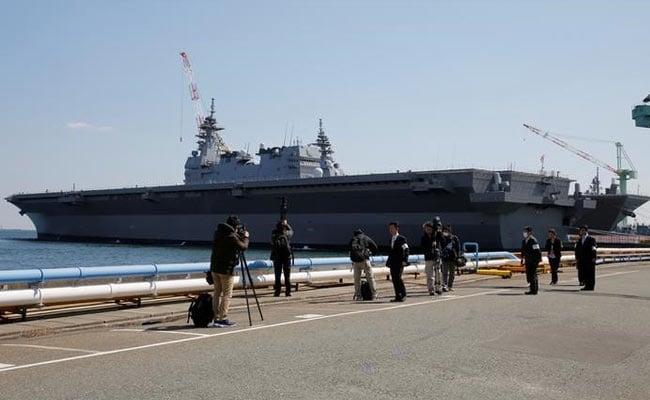 Addition of the Kaga means Japan will be able to mount overseas operations more often. (Reuters)

Yokohama: Japan's second big helicopter carrier, the Kaga, entered service on Wednesday, giving the nation's military greater ability to deploy beyond its shores as it pushes back against China's growing influence in Asia.

Accompanied by a military band, Maritime Self Defence Force commanders took possession of the 248 metre (813.65 ft) long vessel at the Japan Marine United shipyard in Yokohama near Tokyo, where it was docked next to its sister ship the Izumo.

"China is attempting to make changes in the South China Sea with bases and through acts that exert pressure is altering the status quo, raising security concerns among the international community," Vice Minister of Defence Takayuki Kobayashi said at the ceremony attend by about 500 people

Japan's two biggest warships since World War Two are potent symbols of Prime Minister Shinzo Abe's push to give the military a bigger international role. They are designated as helicopter destroyers to keep within the bounds of a war-renouncing constitution that forbids possession of offensive weapons.

In its biggest show of naval power in foreign waters in more than 70 years, Japan plans to dispatch the Izumo in May on a three-month tour through the South China Sea, sources with knowledge of the plan told Reuters earlier.

China claims almost all the disputed waters through which around $5 trillion of global sea-borne trade passes each year. Beijing's growing military presence there has fuelled concern in Tokyo and Washington.

Taiwan, Malaysia, Vietnam, the Philippines and Brunei also claim parts of the sea which has rich fishing grounds, oil and gas deposits. Japan has no claims there, but is locked in an territorial dispute with China over a group of islets in the neighbouring East China Sea.

The addition of the Kaga means Japan will be able to mount overseas operations more often in the future. It will be based in Kure western Japan, which was home to Japan's most famous World War Two battleship, the Yamato. The Izumo operates from Yokosuka near Tokyo, which is also where of the US Seventh Fleet's carrier, the Ronald Reagan is based.

The Japanese ships can operate up to nine helicopters each from their decks. They resemble the amphibious assault carriers used by US Marines, but lack their well deck for launching landing craft and other vessels.

(Except for the headline, this story has not been edited by NDTV staff and is published from a syndicated feed.)
Comments
Japan's DefenceJapan Helicopter Carrier - kagaJapan Military UpdatesSecond Big Helicopter Carrierkaga