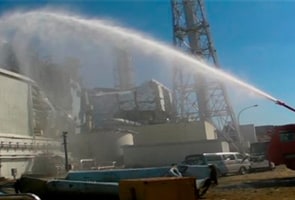 Fukushima: Japan said radiation levels in spinach and milk from farms near its tsunami-crippled nuclear complex exceeded government safety limits, as emergency teams scrambled Saturday to restore power to the plant so it could cool dangerously overheated fuel.

Firefighters also pumped tons of water directly from the ocean into one of the most troubled areas of the Fukushima Dai-ichi nuclear complex, the cooling pool for used fuel rods at the plant's Unit 3, which are at risk of burning up and sending a broad release of radioactive material into the environment.

The first word on contaminated food in the crisis came as Japan continued to grapple with overwhelming consequences of the cascade of disasters unleashed by a 9.0-magnitude earthquake on March 11. The quake spawned a tsunami that ravaged Japan's northeast coast, killing more than 7,200 people, and knocked out backup cooling systems at the nuclear plant, which has been leaking radiation.

The tainted milk was found 20 miles (30 kilometers) from the plant while the spinach was collected between 50 miles (80 kilometers) and 65 miles (100 kilometers) to the south, Chief Cabinet Secretary Yukio Edano told reporters in Tokyo.

While the radiation levels exceeded the limits allowed by the government, Edano said that the products "pose no immediate health risk" and that more testing was being done on other foods. If tests show further contamination, Edano said food shipments would be halted from the area.

"It's not like if you ate it right away you would be harmed," Edano said. "It would not be good to continue to eat it for some time."

Edano said the amount of radiation detected in the milk would as much as one CT scan if consumed continually for a year while for spinach it would be a fifth of one CT scan. A CT scan is a compressed series of X-rays used for medical tests.

Just outside the bustling disaster response center in the city of Fukushima, 40 miles (60 kilometers) northwest of the plant, government nuclear specialist Kazuya Konno was able to take only a three-minute break for his first meeting with his wife Junko and their children since the quake.

"It's very nerve-racking. We really don't know what is going to become of our city," said Junko Konno, 35. "Like most other people we have been staying indoors unless we have to go out."

She brought her husband a small backpack with a change of clothes and snacks. The girls -- aged 4 and 6 and wearing pink surgical masks decorated with Mickey Mouse -- gave their father hugs.

Low levels of radiation have been detected well beyond Tokyo, which is 140 miles (220 kilometers) south of the plant, but hazardous levels have been limited to the plant itself.

Nuclear reactors at the Fukushima Dai-ichi plant began overheating and leaking radiation into the atmosphere in the days after the March 11 quake and the subsequent tsunami overwhelmed its cooling systems. The government admitted it was slow to respond to the nuclear troubles, which added another crisis on top of natural disasters which left an estimated more than 10,000 dead and displaced more than 400,000 others.

The situation is deeply troubled, Edano said Saturday, but at least it's not growing worse.

"The situation at the nuclear complex still remains unpredictable. But at least we are preventing things from deteriorating," Edano said.

A fire truck with a high-pressure cannon parked outside the plant's Unit 3, about 300 meters (yards) from the Pacific coast, and began shooting an arc of water nonstop into the pool for seven straight hours, said Kenji Kawasaki, a spokesman for the nuclear safety agency.

A separate pumping vehicle will keep the firetruck's water tank refilled. Because of high radiation levels, firefighters will only go to the truck every three hours when it needs to be refueled. They expect to pump about 1,400 tons of water, nearly the capacity of the pool.

Meanwhile, Hidehiko Nishiyama of Japan's Nuclear and Industrial Safety Agency said backup power systems at the plant had been improperly protected, leaving them vulnerable to the tsunami that savaged the northeastern coast after the quake and killed more than 7,200 people.

The failure of Fukushima's backup power systems, which were supposed to keep cooling systems going in the aftermath of the massive 9.0-magnitude earthquake, let uranium fuel overheat and were a "main cause" of the crisis, Nishiyama said.

"I cannot say whether it was a human error, but we should examine the case closely," he told reporters.

A spokesman for Tokyo Electric Power Co., which owns and runs the plants, said that while the generators themselves were not directly exposed to the waves, some electrical support equipment was outside. The complex was protected against tsunamis of up to 5 meters (16 feet), he said. Media reports say the tsunami was at least 6 meters (20 feet) high when it struck Fukushima.

Motoyasu Tamaki also acknowledged that the complex was old, and might not have been as well-equipped as newer facilities.

Plant operators also said they would reconnect four of the plant's six reactor units to a power grid Saturday. Although a replacement power line reached the complex Friday, workers had to methodically work through badly damaged and deeply complex electrical systems to make the final linkups without setting off a spark and potentially an explosion.

"Most of the motors and switchboards were submerged by the tsunami and they cannot be used," Nishiyama said.

Even once the power is reconnected, it is not clear if the cooling systems will still work.

The storage pools need a constant source of cooling water. Even when removed from reactors, uranium rods are still extremely hot and must be cooled for months, possibly longer, to prevent them from heating up again and emitting radioactivity.

As Japan crossed the one-week mark since the cascade of disasters began, the government conceded Friday it was slow to respond and welcomed ever-growing help from the United States in hopes of preventing a complete meltdown at the nuclear plant.

The United States has loaned military firefighting trucks to the Japanese, and has conducted overflights of the reactor site, strapping sophisticated pods onto aircraft to measure radiation aloft. Two tests conducted Thursday gave readings that U.S. Deputy Energy Secretary Daniel B. Poneman said reinforced the U.S. recommendation that people stay 50 miles (80 kilometers) away from the Fukushima plant. Japan has ordered only a 12-mile (20-kilometer) evacuation zone around the plant.

The tsunami knocked out power to cooling systems at the nuclear plant and its six reactors. In the week since, four have been hit by fires, explosions or partial meltdowns.

Japan's government on Friday raised the accident classification for the nuclear crisis, putting it on a par with the Three Mile Island accident in Pennsylvania in 1979, and signified its consequences went beyond the local area.

Promoted
Listen to the latest songs, only on JioSaavn.com
This crisis has led to power shortages and factory closures, hurt global manufacturing and triggered a plunge in Japanese stock prices.

Police said more than 452,000 people made homeless by the quake and tsunami were staying in schools and other shelters, as supplies of fuel, medicine and other necessities ran short.