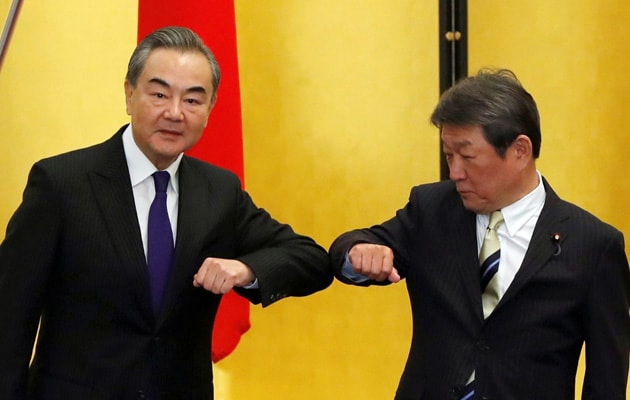 Japan and China agreed on Tuesday to restart coronavirus-hit business travel this month and to continue talks on disputed isles in the East China Sea, in the first high-level dialogue since Japan picked a new leader in September.

On Wednesday, Wang will make a courtesy call on Prime Minister Yoshihide Suga, who has so far sought to balance Japan's deep economic reliance on China with security concerns, including Beijing's claims over the disputed isles that are controlled by Japan.

While Suga has steered clear of the harsh anti-China rhetoric used by Japan's ally the United States, he has moved to counter its influence by deepening ties with Australia and choosing Vietnam and Indonesia for his first overseas trip.

"It's important to interact with people and talk directly with each other," Motegi told a news briefing after the talks.

He was referring to schemes streamlining travel for business travellers and those residing in each country, which has been restricted due to the coronavirus pandemic.

"I hope this agreement will contribute to the revitalization of the economies of Japan and China, and promote mutual understanding," Motegi said.

While the maritime dispute over the East China Sea isles called Senkaku in Japan and Diaoyu in China remains unresolved, the sides have made tentative moves closer through trade agreements.

Japan's government has complained of China's "relentless" intrusions in waters around the islets claimed by both nations.

Motegi called on China to take a "forward-looking stance", and said he would continue to communicate with China.

"We will of course keep protecting our country's sovereignty," he said.

"Through the joint effort by both sides, we would like to make the East China Sea the sea of peace, friendship and cooperation."

China, which is Japan's largest trading partner, this month signed the Regional Comprehensive Economic Partnership (RCEP) with other 14 economies including U.S. allies Japan and South Korea, but the United States was not party to the deal.

It was the first multilateral trade deal for China, the first bilateral tariff reduction arrangement between Japan and China, and the first time China, Japan and South Korea have been in a single free-trade bloc.

Wang, who will fly to South Korea after Japan, said on Tuesday China and Japan agreed to move forward negotiations on a free trade deal between only the three countries.

Wang's visit to Japan reaffirmed their economic partnership, but it still lacked progress on the territorial dispute said Toshiya Takahashi, an associate professor of international relations at Shoin University.

"Out of the bilateral talks, what can be called 'progress' is only the easing of business travel curbs between Japan and China," Takahashi said.