Last month, after Jane Fonda's fourth arrest, she slept on a mattress-less cot in the jail, where she loaned her signature red coat to a fellow shivering inmate inside the drafty building. 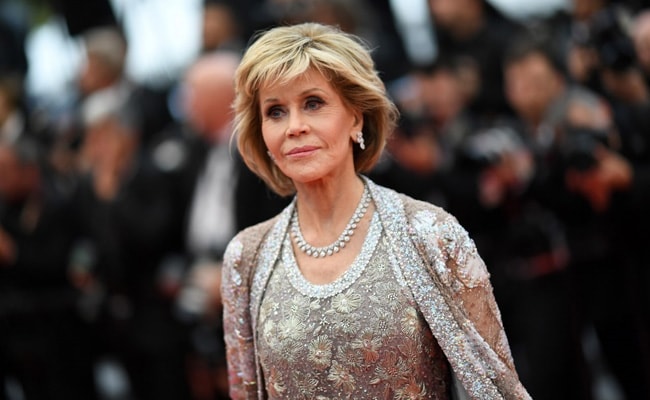 Jane Fonda had been stepping aside for several weeks, encouraging others to be arrested in her stead

Jane Fonda may spend her 82nd birthday behind bars.

Fonda, who has been leading weekly climate change protests called "Fire Drill Fridays" since early October, was arrested Friday along with 137 other demonstrators inside the Hart Senate Office Building, where 50 U.S. senators have offices.

As she was led away by a Capitol Police officer, her hands bound by zip ties, a demonstrator called out to the crowd, "Everybody sing 'happy birthday' to Jane!" She pumped her arms above her head in triumph as the crowd broke into song.

The arrest is her fifth in the past three months during demonstrations calling for government action on the environment, a reduction in fossil fuel production and congressional approval of the Green New Deal, an aggressive decade-long plan to address climate change.

Demonstrators who rack up multiple public-disturbance arrests in a short time are typically held overnight in the District of Columbia jail and made to appear in front of a judge before they can be set free.

Last month, after Fonda's fourth arrest, she slept on a mattress-less cot in the jail, where she loaned her signature red coat to a fellow shivering inmate inside the drafty building. Upon her release, Fonda said, one of her jailers told her, "There's gotta be a better way to call attention to your cause."

"I think she's right," Fonda said as she walked out of the H. Carl Moultrie Courthouse the next day. "My 82-year-old bones hurt."

Fonda had been stepping aside for the past several weeks, encouraging others to be arrested in her stead. Police have arrested several celebrities, including Sally Field and Ted Danson, at the demonstrations. Other activists also have been arrested in droves.

But on Friday, Fonda - whose 1970 raised-fist mug shot has been a symbol of civil disobedience longer than many climate change activists have been alive - stepped back into the fray.

The rally began in front of the Capitol, where Fonda led a crowd in chants and song.

As she climbed to a stage on the Capitol lawn, demonstrators greeted the two-time Oscar-winning actress with a round of "Happy Birthday."

"You may generously say that you came to celebrate my birthday with me in this wonderful activist context, which has gained so much traction - more than I ever imagined - and I appreciate this. But I think we are all here today because we know what lies ahead," Fonda told the crowd. "The earth needs an army."

Halifax, Barber and Steinem also were arrested. Steinem is 85.

"This is a beginning here. We're going to go back to our communities and we're going to do what Jane Fonda is asking us to do," said Huerta, 89. "We're going to give her the best birthday present - ever."

The focus of Friday's demonstration was the health implications of climate change - worsening air and water quality, the effects of extreme weather, and trauma tied to an increase in climate refugees.

Dozens of nurses, clad in white coats and signs pinned to them that said, "Climate change makes us sick," also were arrested. They said they came from across the country to make a stand in the nation's capital.

"As nurses, we are not just focused on treatment, we're also focused on prevention," said Laura Worby, who treats refugee families in the District. "Not only should we care about the health impacts of climate change on our patients now, but we need to be on the front lines of calling for prevention."

Senators' staff members peered out windows down into the cavernous atrium as the voices of demonstrators filled the room: "Cops need oxygen, too," they chanted as police officers encircled them.

"Senators need oxygen, too," they shouted.

As police emptied the marbled hall of protesters one by one, discarded yellow placards spotted the ground. They read: "Happy 82nd birthday Jane!"