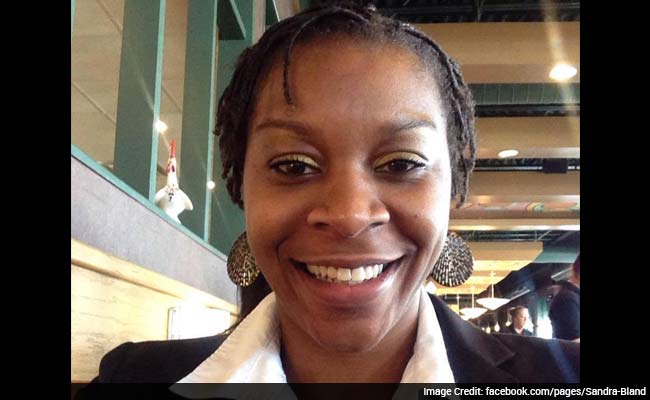 Prosecutors said on Monday they plan to release a security camera video that shows nobody entered or left the cell of Sandra Bland.

Chicago: The jailhouse death of a black woman imprisoned after allegedly getting combative during a traffic stop in rural Texas has raised suspicions amid heightened racial tensions in the United States.

Prosecutors said on Monday they plan to release a security camera video that shows nobody entered or left the cell of Sandra Bland, 28, before her body was discovered in what authorities said was an apparent suicide.

But, with tensions inflamed in the wake of a series of high-profile cases of black men being killed by police in disputed circumstances, many people wouldn't trust any official account of the incident.

"Indeed, because state violence echoes through the African-American experience in this country, it is even understandable if black people might occasionally experience a sort of 'Phantom Lynching Syndrome.'"

A video of Bland's arrest -- that shows her pinned to the ground after being pulled over for failing to signal a lane change -- helped fuel suspicions that something nefarious may have happened.

"Thank you for recording," she says as she's led handcuffed into a cruiser. "For a traffic signal -- slammed me into the ground and everything."

The video was widely circulated on social media last week and the hashtag #IfIDieInPoliceCustody began trending on Twitter as African Americans expressed their concerns.

"#IfIDieInPoliceCustody know I did everything my mom taught me about how to stay alive if arrested, but it wasn't enough," wrote Malkia Cryil.

A woman identified as Keya D wrote: "#IfIDieinPoliceCustody make sure my baby girl continues to love her beautiful black skin."

The success of the hashtag is a "sad statement about how people feel about those who are sworn to protect and serve," columnist Yesha Callahan wrote on The Root.

While Bland had struggled with depression in the past, her family insists that suicide was simply not in her character.

They have reportedly requested an independent autopsy because they did not believe the local coroner's conclusion that her death was a suicide.

"Based on the Sandy I know, that's unfathomable to me," her sister Sharon said at a press conference.

Bland was on her way to start a new job at her alma mater, Prairie View A&M University near Houston, when she was pulled over on July 10 at 4:30 pm.

She was found dead in her cell at 9:00 am on July 13, the Waller County Sheriff's Office said.

Bland was arrested for "assault on a public servant" after becoming "argumentative and uncooperative" during the traffic stop, according to the Texas Department of Public Safety.

A preliminary investigation by the department found the arresting officer violated the department's "courtesy policy" and procedures regarding traffic stops.

"Once the local process takes its course, the FBI will review all of the evidence to determine if any federal criminal laws may have been violated," it said in a statement.

Bland was an activist in the Black Lives Matter movement, which grew out of protests sparked by the police shooting of Michael Brown in Ferguson, Missouri and cases such as that of Freddie Gray, who sustained a fatal spinal injury in a Baltimore police van.

A video Bland posted on her Facebook page about racism in America was seen as telling by those who mistrust the police.

"We can't help be pissed off when we see a situation where it's clear the black lives don't matter," Bland said.

"You can stand there, surrender to the cops and still be killed."