It's Not Chaos. It's Trump's Campaign Strategy. 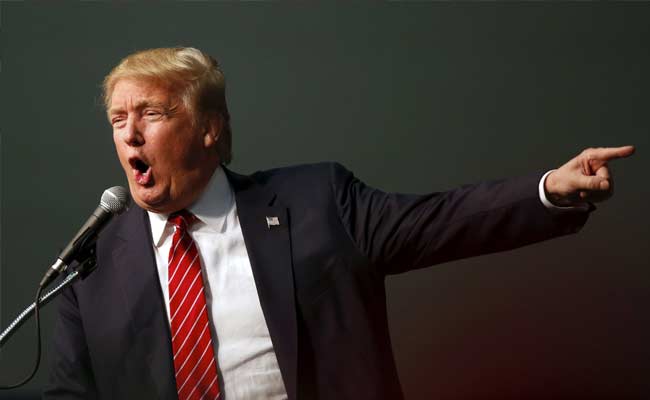 Trump often provokes a fresh, whiplash-inducing controversy that eclipses the current one, triggering a new round of free media coverage that cements his place at the forefront of the news cycle.

He referred to Mexicans as "rapists," questioned Sen. John McCain's status as a war hero, ridiculed the physical appearance of his opponents, falsely claimed that "thousands" in New Jersey cheered as the World Trade Center fell and, this week, called for a ban on Muslims entering the United States.

Despite predictions that such searing, divisive rhetoric and the resulting outcry would cripple his campaign, Donald Trump's insults and controversial proposals have propelled him to the forefront of the 2016 presidential race - and kept him there.

And while it may seem like a lurching, chaotic campaign, Trump is, for the most part, a disciplined and methodical candidate, according to a Washington Post review of the businessman's speeches, interviews and thousands of tweets and retweets over the past six months.

Trump delivers scores of promises, diatribes and insults at breakneck speed. He attacks a regular cast of villains including undocumented immigrants, Muslims, Democratic front-runner Hillary Clinton, his GOP rivals and the media. He keeps the narrative arc of each controversy alive with an endless stream of statements, an unwillingness to back down even when he has misstated the facts - and a string of attacks against those who criticize him.

All the while, his supporters see a truth-talking problem solver unlike the traditional politicians who have let them down. Spending remarkably little, he dominates yet another news cycle, and his Republican rivals languish in his shadow.

On any given day, the reality TV star's attacks are delivered from a variety of stages, whether it is broadcast interviews or his stream-of-Trumpness monologues at rallies. During one hour-long speech in November in Alabama, Trump logged nearly four dozen barbs, a rant in which he described President Obama as representing "us very poorly - very, very poorly - horribly, actually;" Secretary of State John F. Kerry as a "loser;" and the American dream as "dead."

Trump uses his Instagram account, which has more than 650,000 followers, to deliver snarky messages and short videos of him scowling as he delivers pronouncements from his Trump Tower desk. On Twitter, Trump's 5 million followers can keep up with his next appearance ("Will be on @ABC News tonight at 6:30 pm") and new poll numbers ("Just won IOWA @CNN Poll BIG"). Trump has posted more than 6,000 tweets since launching his campaign in June.

No one is off-limits - not even a disabled New York Times reporter. And no one is too small, as Louisiana Gov. Bobby Jindal learned when Trump dismissed his struggling campaign in three tweets, the last of which read: "Oh wow, lightweight Governor @BobbyJindal, who is registered at less than 1 percent in the polls, just mocked my hair. So original!"

"Choker," "weak," and "clown" are the words Trump repeats to brand opponents such as Sen. Marco Rubio, R-Florida, and former Florida governor Jeb Bush, as well as critics such as Republican consultant Karl Rove. More recently, Trump has questioned whether Clinton has "the strength or the stamina" to be president, while boasting that he needs only four hours of sleep every night.

The Post's analysis found several qualities to Trump's approach. First is a pattern of experimentation that suggests that he is testing his insults and attacks as he goes along. Like a team of corporate marketers, Trump understands the value of message testing - but he appears to do it spontaneously, behind the lectern and on live television.

After 74-year-old Sen. Bernie Sanders, I-Vermont, underwent outpatient surgery for a hernia, Trump tried joking about it. At a rally in Georgia on Nov. 30, Trump said the condition was caused by "carrying around too much tax problems." The response from the audience was tepid. Trump tried again at a rally two nights later in Virginia: "He was carrying around the tax code he wants to make larger." It still didn't get many laughs - and Trump stopped trying.

Another quality to Trump's words is the kernel of truth that often exists in even his most inflammatory statements. He told supporters that Obama would allow 200,000 or 250,000 Syrian refugees into the country, describing the level as "insane." In fact, the administration has agreed to admit only 10,000. Trump has refused to backtrack, once explaining that his larger number comes from a "pretty good source."

These patterns of speaking, along with his charm and sometimes lavish praise for people he likes, resonate with many conservative voters who are looking for someone to trust over the mainstream media. They see Trump as genuine and honest, one of the few politicians who doesn't lie to them, even if his comments are not fully true.

With each new uproar, the analysis also showed, a largely predictable cycle unfolds. It begins with Trump's bombast. Next comes condemnation and predictions that his candidacy is doomed, followed by his tendency to keep going without backing down. The pattern has repeated with many of his major controversies.

Trump often provokes a fresh, whiplash-inducing controversy that eclipses the current one, triggering a new round of free media coverage that cements his place at the forefront of the news cycle.

On Nov. 18, he drew attention - and criticism - for appearing to mock an overweight protester at his rally; the next day he found himself enmeshed in a new controversy over whether to track Muslims with a database.

At other moments, Trump repeats his inaccuracies with escalating zeal even as they are debunked by experts. At the rally in Alabama, he said he "watched" on September 11, 2001, as "thousands and thousands of people" in Jersey City "were cheering" as the "World Trade Center came tumbling down."

Politicians and law enforcement officials dismissed his claim for a full week. Trump refused to back down. He presented the opinion of his own supporters as evidence that he was correct. His persistence drew him even more attention.

"I saw it at the time. I stick by it," he told "Meet the Press" moderator Chuck Todd, who challenged his account in late November. ". . . And I'm getting unbelievable response of people that said they saw it."

The pattern of Trump's deliveries, even as he is widely vilified, has been on display since he announced his candidacy in June at Trump Tower on Manhattan's Fifth Avenue.

A legion of Democrats and Republicans denounced him, including several of his GOP opponents. Univision canceled its agreement to broadcast Trump's Miss Universe pageant, and Macy's stopped selling his line of clothing and fragrances.

In response, Trump tweeted that "druggies, drug dealers, rapists and killers are coming across the southern border. When will the U.S. get smart and stop this travesty?"

He used Twitter to declare that Macy's "stores suck." He pounded opponents who criticized him, including Bush and former Texas governor Rick Perry, saying that both were weak on border security. Mocking Perry, Trump wrote, "He needs a new pair of glasses to see the crimes committed by illegal immigrants."

At the same time, two dramatic events occurred that emboldened Trump's anti-immigrant rhetoric, providing the element of truth his supporters could cite in championing his candidacy.

In San Francisco, an undocumented immigrant shot and killed Kathryn Steinle, 32, who became "beautiful Kate" in Trump's demand for a wall separating Mexico and the United States.

Days later, the drug kingpin known as "El Chapo" escaped from a Mexican prison, prompting Trump to tweet that the United States would invite the felon "to become a U.S. citizen because our 'leaders' can't say no!"

His campaign was barely a month old. Pundits and columnists predicted his demise. But Trump would not relent. Instead, he found a new target: McCain.

In Iowa on July 18, Trump began a news cycle like many others - with an outrageous attack that critics said would kill his campaign. It didn't.

First, he questioned McCain's status as a war hero, an identity the senator from Arizona acquired as a prisoner of war in Vietnam.

"He is a war hero because he was captured," Trump said. "I like people that weren't captured, OK?"

Next, Trump denied that he had questioned McCain's heroism. Then he shifted the crux of his criticism. Instead of McCain's military service, Trump questioned the senator's record on veterans issues, undeterred by the torrent of criticism he faced from Washington's political establishment, military groups and his Republican opponents.

"In addition to doing a lousy job in taking care of our Vets, John McCain let us down by losing to Barack Obama," Trump tweeted, among more than a dozen tweets and retweets he sent in the ensuing days.

Once again, pundits pondered Trump's survival, but pollsters only found his support growing.

For all his apparent ad-libbing, Trump's presentation is rife with words he often repeats. He tells supporters that the wall he wants to build on the southern border would be the "greatest." The purported mastermind who terrorized Paris was a "moron" in a "filthy, dirty hat."

He is no more predictable than when he disparages his Republican opponents, using his outsize platform to define them in highly personal and unflattering terms. While he likes to describe himself as a counter-puncher, ever ready to strike once he is attacked, Trump often lashes out at rivals who threaten him in the polls.

In early November, GOP rival Ben Carson's popularity in Iowa was rising, prompting Trump to repeatedly mock and promote doubts about the accuracy of the surgeon's autobiography. "How stupid are the people of the country to believe this crap?" Trump asked one audience.

Soon, Carson's poll numbers sank, a development that Trump made sure to point out to his audiences.

From July through October, Trump sent more than 50 tweets and retweets about Bush, describing him as "weak," "really weak," "pathetic," and "totally lost." On television and at his rallies, Trump branded Bush as "low-energy," a characterization he repeated in an ad in which the narrator says, "Jeb: For all your sleeping needs."

As he rose in the polls during the fall, Rubio found himself the target of Trump's tweets and retweets nearly two dozen times, a litany that included descriptions of the senator as a "lightweight."

After the carnage in Paris and through the rampage in San Bernardino, Calif., three weeks later, Trump shifted his attention to terrorism, a focus that culminated with his proposal this week to ban Muslims from the United States.

As outrage about his remarks mounted Tuesday, and his name dominated another news cycle, Trump again showed no signs of retreat.

"Wow, what a day," he tweeted that night. "So many foolish people that refuse to acknowledge the tremendous danger and uncertainty of certain people coming into U.S."

Ponzi Scheme Mastermind, Sentenced To 150 Years, Dies In US Prison