Italy's Beaches: Open for Business But Closed to Competition 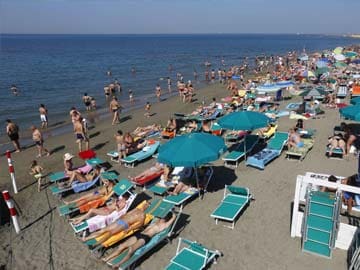 Milan: Italy's beaches are a family affair - and that's a problem for the euro zone's third-largest economy.

Most of the beaches along Italy's 7,500 kilometres of sun-kissed coast have for decades been managed by small businesses operating concessions that are passed on from generation to generation.

Though licences are state-owned, they rarely come up for public bids, allowing Italy's balneari - or beach managers - to keep a tight grip on amenities ranging from single-shack parasol rentals to up-market bars and restaurants.

The balneari say the all-in-the-family system keeps costs low for beachgoers. But local and foreign entrepreneurs say they're being shut out.

The battle of the beaches offers a window onto one of the biggest barriers to Italy's economic development: the lack of competition across sectors. Guilds, associations and other lobbies that are politically powerful have for decades prevented new blood from entering the economy and are one of the reasons it has barely grown over the past two decades.

"Beach concessions should be given to people who will manage them effectively, who will work hard and create new jobs," says Flavio Briatore, a businessman and former Italian Formula One investor.

Briatore has been running the "Twiga" beach club in the trendy resort of Forte dei Marmi for the past 15 years. But he has never been able to bid for the licence directly. Instead he says he sublets the beach from a licence holder for 250,000 euros a year. That compares to the 3,570 euros on average that each direct licensee pays the government, according to official figures.

"The government shouldn't give concessions to those who speculate by subletting," says Briatore.

Many governments have tried to pry open parts of Italy's services sector including taxis, pharmacies and legal practices. But the results have been mixed.

Two years ago the government of Mario Monti attempted deregulation, but many of the measures were diluted by parties protecting vested interests. Italy's new prime minister, Matteo Renzi, nicknamed Demolition Man, has staked his reputation on cleaning up Italian business and rewarding merit.

The European Union is also trying to put its foot down. In 2006, the EU ordered its member states to open up various sectors to competition. It told Italy to put its 28,000 beach licences up for public tender.

Yet Italy has been stalling. First it got the EU to agree to extension of the existing licensing system to 2015. Then in 2012, the government yet again bowed to pressure from the balneari and passed a national law shoving the deadline back further to 2020.

Now, Renzi is trying to convince Brussels to accept the 2020 deadline or risk a possible infringement procedure that might lead to a fine. The new government says it needs the extra time to overhaul the beach licensing system while limiting the damage for thousands of concession owners.

It's not just an issue of fairness. Italian beaches generate revenues worth almost 10 billion euros a year, according to Angelo Bonelli, leader of Italy's Green Party. Yet only around 100 million euros a year go to the state through the concession of operating licences.

Briatore's savannah-style Twiga resort draws deep-pocketed holidaymakers from Britain, Russia and beyond to its umbrellas, discos and restaurant. By subletting, licence holders can earn handsomely.

"The beach business in Italy has created a caste. Licences have been doled out on a private basis with no tenders, It's a lobby in all senses of the word," says Bonelli.

"State assets need to be exploited to the full, beach licences are not generating revenues in line with their real value," agrees Pier Paolo Baretta, undersecretary of the economy ministry.

Italy's beaches haven't always been good business. Danilo Piraccini, who runs a cooperative of balneari, says his father - a poor fisherman - was awarded a beach concession by the state after World War II. Piraccini says his father didn't have to promise any improvement to the beach in exchange; he just committed to keeping the sand clean.

It was not until Italy's 1960s economic boom - when motorways were built, hotels were erected and tourists began coming to Italy - that the beach business exploded. Piraccini says his dad had one client in 1957. Now, the same stretch of beach in the bustling Riviera town of Milano Marittina, near Rimini, lures 200 families per month.

Like Piraccini, who inherited the beach from his father, thousands of other families have passed on post-war licences again and again over the decades. Though the state officially gives out the licences on a six-year basis, renewals almost never come up for public tender.

Mario Pelucchi, analyst at think tank Nomisma who recently published a report on Italy's beaches, says "it's a fragmented industry with around 90 percent of the businesses run by families."

The system eventually raised flags in Brussels. In 2008, the European Union officially criticized Italy for the way it awarded its beach licences, saying too many concessions were renewed without opening them up to new entrants.

Treasury undersecretary Baretta says Rome is hoping to get EU approval for the new 2020 deadline, so that Italy has time to introduce a new system that will introduce a fairer tender system but also reward long-time balneari who have invested in Italian beaches for decades.

The balneari are already sharpening their knives. Fabrizio Licordari, beach management representative at employer's lobby Confindustria, says keeping Italy's beaches in the hands of small business has stopped them falling prey to big hotels with a lack of respect for local traditions.

He says small businesses keep organised crime - which preys on lucrative big state contracts - at arm's length. Licordari also says beach managers should have the right to decide whether they want to hand out licences to newcomers or not.

Promoted
Listen to the latest songs, only on JioSaavn.com
"Some of my colleagues didn't send their kids to college but taught them the profession," says Licordari. "Now with all these tenders they run the risk of someone else coming in and leaving them jobless."

"Italy's beach system is unique, run by small family enterprises that invested on the basis of a law," adds Sergio Pizzolante, a lawmaker with the centre-right party, Nuovo Centro Destra, which is a member of the governing coalition. "Brussels must understand you can't just take that away without recognising the value of their businesses."
© Thomson Reuters 2014