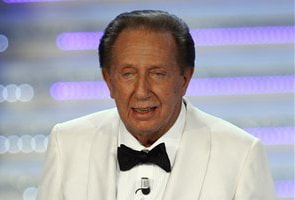 Novara: The body of Mike Bongiorno, a US-born Italian television host who died in 2009 has been stolen from its grave near the northern city of Milan, Italian media said on Tuesday, citing police.

Bongiorno's coffin was removed overnight from his family's crypt in Dagnente, in the province of Novara. An old man who came to lay flowers on the grave early on Tuesday raised the alarm.

A ransom was not immediately demanded, but parish priest Mauro Pozzi said he believed this was the purpose of the raid. He drew parallels with the theft ten years ago of legendary Italian financier Enrico Cuccia's coffin from a cemetery in northern Italy.

Pozzi deplored the theft of Bongiorno's coffin saying it showed "people no longer have respect for anything".

In March 2001, a criminal gang stole Cuccia's coffin from Meina cemetery on Lake Maggiore, where he had been buried in June, 2000. The coffin was later recovered from a hay loft in Val Susa.

Police forensic experts were on Tuesday investigating the theft of the coffin, which has drawn condemnation from his family and from the mayor of the nearby town of Arona, Alberto Gusmeroli.

Prominent Italian TV host Pippo Baudo also condemned the theft as "barbarity".
"Words cannot describe such a vile act, which has offended and dismayed me. It is sacrilegious, disgusting and dirty. I can't imagine what the intention of these desecrators could be," Baudo told AKI.

Well-known Italian criminologist Francesco Bruno said financial gain in the form of a ransom may be the objective of the theft.

Another motive could be a kind of fetishism, "a subconscious desire to identify with such a famous person... to share something with them and be close to them," Bruno said.

Bongiorno, born in New York City, helped in the early success of Prime Minister Silvio Berlusconi's media empire. Berlusconi described him as "one of the protagonists of Italian television history", after his death in September 2009 at age 85.