"It Was In Front Of Us": Plane Crashes On US Highway, Hits Vehicle

Prince George's County Fire Department spokesman Mark Brady said the aircraft went down before 11:30 am near Freeway Airport in Bowie 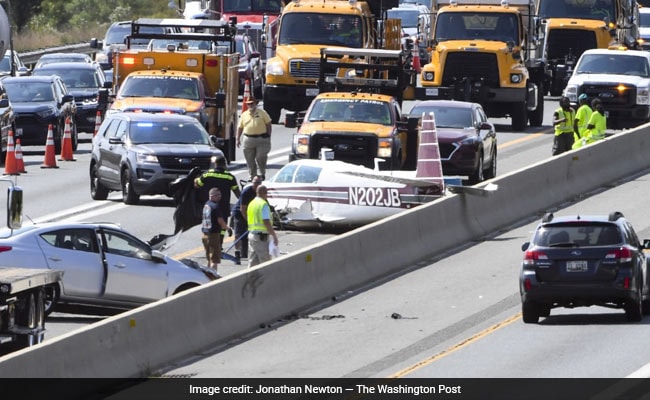 A small plane crashed after takeoff and struck a car Thursday morning in Prince George's County, Maryland, hitting the vehicle on U.S. 50 and injuring two people inside, authorities said.

Prince George's County Fire Department spokesman Mark Brady said the aircraft went down before 11:30 a.m. near Freeway Airport in Bowie. The small airport is adjacent to the eastbound lanes of U.S. 50.

Two adults in the car were taken to a hospital with minor injuries after the crash, Brady said, and two people in the plane were evaluated for injuries and declined to be transported.

Maryland State Police said officers responded to eastbound Route 50 at Church Road when the plane crashed moments after taking off from the small airport. The cause of the crash hasn't been determined, police said.

Police identified the pilot as Julius Tolson, 58, of Laurel, and his passenger as Michael Garrah, 57, of Columbia. Both are listed as "other owners" of the plane in the Federal Aviation Administration registry.

A message to Tolson at a number found in public records wasn't immediately returned. Contacted at the scene, Garrah declined to comment.

The plane's registered owner, Derrick Early of Greenbelt, said he didn't know what caused the aircraft to go down.

"Accidents like these, there's an official investigation into it," he said. "And so the goal is to figure out what happened."

Eric Diprospero, 31, of Baltimore, said he was headed to work in Annapolis with a colleague when "out of nowhere a plane appeared in the middle of the highway and we struck it very hard."

"It was in front of us," he said. "It was a split-second thing where it skidded right across the middle of the highway and there was no time to react. We just kind of hit it straight on."

Diprospero said that he was grateful for the fast response of authorities and that he and his co-worker, who was hospitalized, suffered only minor cuts and bruises.

"It's just probably a miracle, right?" he said. "I've never been involved in a vehicle-plane crash before."

The white-and-maroon plane sat on its belly in the inner median of the highway as ambulances and police cruisers swarmed the scene. What appeared to be the plane's shorn-off wing was crumpled several yards away next to a silver sedan with a smashed front end and its doors flung open.

"I'm counting our lucky stars it wasn't worse," he said.

Maryland State Police and the FAA are handling the investigation, he said.

Catherine Harvey was one of several residents and motorists who stopped along an overpass to take photos and observe the scene. Harvey, who has lived in Bowie for 12 years, stepped out onto her porch after hearing the ambulances and then headed to the overpass.

She wasn't surprised to learn that the plane had crashed nearby. Another one had crashed into the woods along the highway about three years ago, she recalled.

A woman at the office of Freeway Airport declined to comment on the crash. A website for the airport said it has been "offering flight instruction, pilot services and aircraft maintenance in the Baltimore-Washington area for over 50 years."

It touts itself as "one of the few rural areas left in Maryland's Prince George's County" to offer "an ideal and relaxed atmosphere for flight lessons."