Virginia Lottery released the photograph of a jubilant Alonzo Coleman posing with the giant $250,000 check and "I am a grumpy old man" t-shirt. 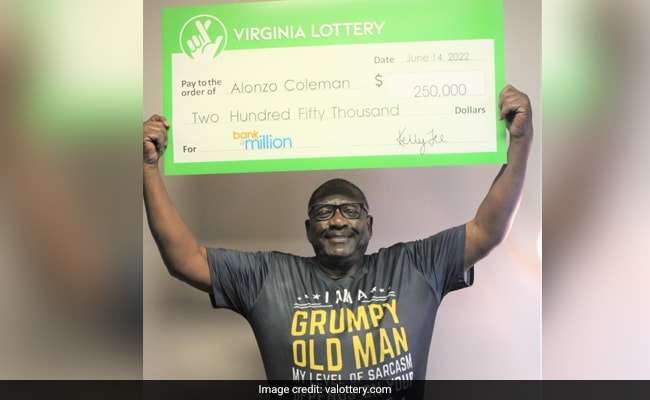 A man in the United States won a lottery jackpot of $250,000 by buying tickets using the number he'd seen while sleeping. Alonzo Coleman, from Virginia, bought the ticket from a corner mart, a report in NBC-affiliate local WWBT said.

Mr Coleman bought the ticket for $2 and was surprised after winning quarter of a million dollars. "It was hard to believe!" he told lottery officials, according to WWBT. "It still hasn't hit me yet!"

The result of the lottery was announced on Thursday.

Coleman, a retiree whose age was not released, told lottery officials he had dreamt of the winning numbers beforehand.

Virginia Lottery released the photograph of a jubilant Mr Coleman posing with the giant $250,000 cheque and "I am a grumpy old man" t-shirt.

According to Newsweek, Virginia Lottery holds draws on Wednesdays and Sundays and the three top prizes are $1 million, $500,000 and $250,000. It further said that the odds of winning the top prize are 1 in 3.8 million.

There are many stories of major lottery wins that have stunned the world. Like a truck driver in Michigan who hit the jackpot of $1 million after initially thinking that he had won $2,000.

Fox2 Detroit said in a report that the man told the lottery office to give him the prize money as a one-time lump sum amount of about $693,000 rather than 30 annuity payments.