Rivlin went on to say that Duterte's visit to Israel's Yad Vashem Holocaust memorial on Monday must have illustrated to him the sensitivity surrounding any reference to Adolf Hitler. 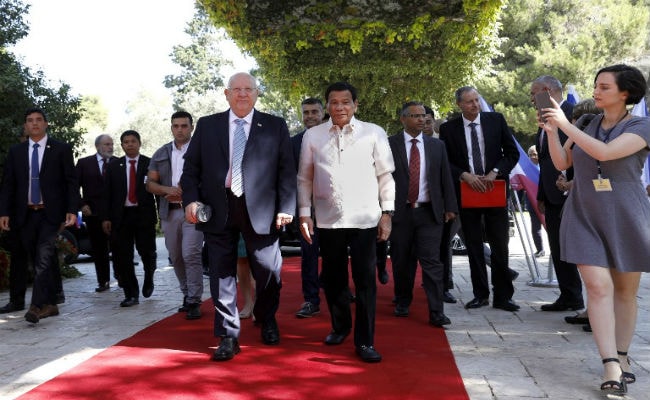 Israeli President Reuven Rivlin gave a brief lecture on Hitler to Rodrigo Duterte on Tuesday after the Philippine leader's 2016 remarks comparing himself to the Nazi dictator who carried out the Holocaust.

"Hitler was actually representing the devil himself," Rivlin said when the two men met at his Jerusalem office. "He was the devil on earth."

Rivlin went on to say that Duterte's visit to Israel's Yad Vashem Holocaust memorial on Monday must have illustrated to him the sensitivity surrounding any reference to Adolf Hitler.

"Probably you have realised yesterday the feelings when you have visited the museum of Yad Vashem in Jerusalem, to really feel the atmosphere, to feel the feelings of all the people that were part of this disaster," said Rivlin, whose position is mainly ceremonial.

Duterte appeared to be listening attentively during Rivlin's brief comments. He later spoke about trade and cooperation with Israel.

The controversial Philippine president spoke of Hitler in 2016 when talking about his violent drug crackdown that has killed thousands.

"Hitler massacred three million Jews. Now there are three million drug addicts (in the Philippines). I'd be happy to slaughter them," Duterte said then.

Duterte later apologised and said the comments were aimed at critics who had likened him to the Nazi leader.

Duterte also told Rivlin he had ordered his military to only buy military and intelligence equipment from Israel.

He said the United States was a "good friend," but buying such equipment from US firms meant the country would "also be listening", seemingly meaning gathering intelligence on the Philippines.

Duterte said the same would be true for countries such as China or Germany.

The comments seemed to contradict Duterte's previous remarks. In November, he said he planned to buy more weapons from Russia.

A few dozen people opposed to arms sales to the Philippines protested outside the presidential compound in Jerusalem during the meeting.

Further arms deals were expected to be part of Duterte's discussions in Israel.

In comments before their working lunch, Duterte thanked Israel for supplying him with unspecified defence equipment that was "critical" in "winning the war" -- a reference to his government's battle against jihadists in the city of Marawi last year.

On Wednesday, he will lay a wreath at a memorial near Tel Aviv commemorating the Philippines' acceptance of 1,300 Jews fleeing the Holocaust. He will travel to Jordan later in the day.

Duterte's trip to Israel began on Sunday night with him apologising to former US president Barack Obama for having called him a "son of a whore" in 2016, one of several foul-mouthed remarks that have caused outrage.

He lobbed the insult in response to steady criticism from the United States at the time over his violent drug crackdown.

On Tuesday, he ordered the arrest of a lawmaker fiercely critical of his drug war, the second presidential critic from the Senate to be threatened with detention.