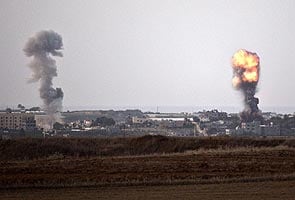 Gaza City: Israeli air strikes destroyed the cabinet headquarters of Gaza's Hamas rulers on Saturday after militants fired rockets at the heart of Israel which called up thousands more reservists for a possible ground war.

The Israeli military said it had sealed off all main roads around Gaza and declared a closed military zone, in the latest sign it was poised to launch a first ground offensive on the Palestinian enclave since December 2008-January 2009.

Witnesses said the damage was extensive but there were no reports of casualties.

An Israeli air strike on Rafah in southern Gaza, however, killed four people later on Saturday morning, Palestinian medics said, raising the overall death toll from the aerial campaign to 38.

The attack came as Tunisian Foreign Minister Rafik Abdessalem crossed into southern Gaza through the Rafah border crossing with Egypt, a day after a solidarity visit by Egypt's premier.

It followed hot on the heels of other strikes elsewhere in the city which killed one, and a raid on a refugee camp in central Gaza which killed another three, medics said.

Tanks were seen massing along the Gaza-Israel frontier on Friday, and a steady stream of reservists arrived throughout the day.

President Barack Obama reiterated US support for Israel's right to defend itself during a call with Israeli Prime Minister Benjamin Netanyahu about the conflict in Gaza.

Israeli ministers approved the call-up of as many as 75,000 reservists as Netanyahu held late evening talks at the defence ministry in Tel Aviv with his key ministers, Channel Two television reported.

Hamas's military wing said it fired a rocket at Jerusalem, and witnesses said another crashed into the sea off Tel Aviv on Friday. A rocket attack also killed three Israelis.

The two rockets were the farthest Gaza militants have ever fired into Israel, exceeding even the 60 kilometres (36 miles) achieved by a rocket that hit the sea off Jaffa, just south of Tel Aviv, on Thursday.

Neither caused any casualties or damage, but they sowed panic in both of the Jewish state's main population centres, setting off warning sirens and sending people scurrying to shelters.

It marked a major escalation by Hamas in the face of a deadly pounding since Wednesday by Israeli aircraft that has sparked outrage across the Arab and Islamic world.

UN and Palestinian officials said UN chief Ban Ki-moon would travel to the region in days to push for a truce.

"Ban went to the region during the last Israeli offensive against Gaza in 2009 and worked hard to end that conflict. He is looking to produce a truce and ceasefire this time as well," one senior UN diplomat said.

Even before the latest rocket fire, senior cabinet minister Moshe Yaalon warned that Israel was poised for a ground offensive.

"We are preparing all the military options, including the possibility that forces will be ready to enter Gaza in the event that the firing doesn't stop," he said.

As ground troops massed, there was no let-up in Israeli air attacks.

A child was among the dead reported by the territory's emergency services on Friday, two of whom were brought in to Gaza City's Shifa hospital as Egypt's Prime Minister Hisham Qandil toured the wards on an unprecedented solidarity visit.

Washington appealed to Egyptian leaders as well as to allies such as Turkey to use their sway with the Palestinians in a flurry of telephone diplomacy aimed at containing the crisis.

In his call to Netanyahu, Obama "reiterated US support for Israel's right to defend itself, and expressed regret over the loss of Israeli and Palestinian civilian lives," the White House said.

Netanyahu expressed his deep appreciation for US investment in the Iron Dome rocket and mortar defence system, "which has effectively defeated hundreds of incoming rockets from Gaza and saved countless Israeli lives".
Comments
IsraelHamasGaza