Israel Bars Visit By US Congresswomen, Encouraged By Donald Trump

Israel Prime Minister Benjamin Netanyahu called the highly unusual move against Ilhan Omar and Rashida Tlaib necessary, charging that their "sole purpose is to harm Israel and increase incitement against it". 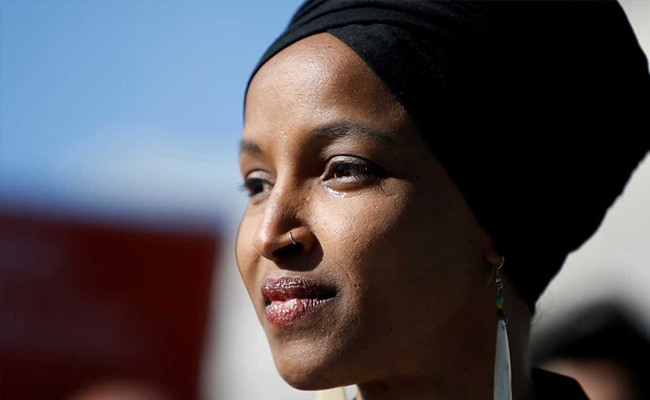 Israel said Thursday it will bar a planned visit by two US congresswomen who have supported a boycott of the country over its treatment of the Palestinians, a decision strongly encouraged by President Donald Trump.

Prime Minister Benjamin Netanyahu called the highly unusual move against Ilhan Omar and Rashida Tlaib necessary, charging that their "sole purpose is to harm Israel and increase incitement against it".

But Democratic politicians in the United States called on Israel to reconsider, while senior Palestinian official Hanan Ashrawi labelled it "an outrageous act of hostility against the American people and their representatives".

Omar and Tlaib, who is of Palestinian origin, were expected to arrive in Israel at the weekend for a visit that would have taken them to the Palestinian territories.

Israeli officials said they would consider a separate humanitarian request from Tlaib to visit family members in the occupied West Bank, a trip for which she would have to pass through Israel.

Israel announced its decision shortly after Trump called on the country to bar the Democratic congresswomen who are among his sharpest critics.

"It would show great weakness if Israel allowed Rep. Omar and Rep. Tlaib to visit," Trump wrote on Twitter.

He continued with typical bombast: "They hate Israel & all Jewish people, & there is nothing that can be said or done to change their minds. Minnesota and Michigan will have a hard time putting them back in office. They are a disgrace!"

Tlaib is from Michigan and Omar from Minnesota.

Netanyahu alleged their itinerary showed they intended to strengthen the boycott movement against Israel.

"As a vibrant and free democracy, Israel is open to any critic and criticism, with one exception," Netanyahu said in a statement.

In 2017, Israel passed a law banning entry to foreigners who support boycotting the country.

The law was passed in response to a movement to boycott Israel as a means to pressure the country over its treatment of the Palestinians.

Israel sees the movement as a strategic threat and accuses it of anti-Semitism -- a claim activists deny, saying they only want to see the occupation end.

Prominent Arab Israeli parliament member Ayman Odeh called the ban of the congresswomen "another desperate attempt to hide the reality to the world".

Both Omar and Tlaib have been critical of Israel's occupation of the West Bank and treatment of Palestinians.

The Democrats have also faced accusations of anti-Semitism, which they firmly deny.

The Israeli ambassador to the United States, Ron Dermer, had previously signalled the two congresswomen would be allowed to visit out of respect for Washington, Israel's most important ally.

But the two are also outspoken political opponents and critics of Trump, who has a close relationship with Netanyahu.

Known as "the squad," the congresswomen -- along with two other progressive congressional allies, Alexandria Ocasio-Cortez and Ayanna Pressley -- have been in Trump's crosshairs.

He has taken aim at the four in a series of xenophobic comments, telling them to "go back" where they came from and accusing them of having "love" for America's "enemies like Al-Qaeda", among other remarks.

Ocasio-Cortez, a 29-year-old of Puerto Rican ancestry, is the youngest member of the House of Representatives, while Pressley is the first African American elected to Congress from Massachusetts.

Tlaib and Omar, who fled war-torn Somalia as a child and arrived in the United States as a refugee, are the first two Muslim women elected to Congress.

Tlaib is also the first woman of Palestinian descent in Congress.

The two congresswomen had not reacted to the decision, but Pressley called it "bigoted, short sighted and cruel".

Members of Congress are regular visitors to Israel and the Palestinian territories and blocking them is highly unusual.

It comes at a time when Jewish groups in the United States have expressed concern over whether bipartisan support for Israel in Washington is eroding.

Democratic candidates for president in the United States have openly criticised Netanyahu, who is seeking re-election in Israel on September 17 after polls earlier this year failed to yield a coalition.

Influential US pro-Israel lobby AIPAC said it disagreed with the congresswomen's views, but opposed the decision to bar them.