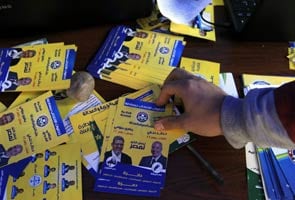 Partial figures trickled in for the areas of the country that voted in record numbers on Monday and Tuesday, confirming earlier predictions that Islamist parties would win at least two thirds of the ballots cast.

In Port Said, the moderate Islamist alliance led by the previously banned Muslim Brotherhood triumphed with 32.5 percent of votes for parties, while the hardline Al-Nur party gained 20.7 percent, the state-owned Al-Ahram daily said.

The liberal Wafd party won 14 percent, while another Islamist party Al-Wassat, which advocates a strict interpretation of Islamic law, recorded 12.9 percent, according to Al-Ahram.

In the southern Red Sea district, the Brotherhood's alliance won 30 per cent, while secular coalition the
Egyptian Bloc came in second with 15 percent, said Al-Ahram.

Full results were initially meant to have been published on Wednesday but have been delayed several times. The election commission promised on Friday evening at a chaotic press conference to post them on its website.

There appeared few bright spots for the liberal secular movement which played a key role in the overthrow of the 30-year rule of Hosni Mubarak in February after an 18-day uprising.

It has since splintered and has been outgunned by the more organised Brotherhood, well known to Egyptians as a result of its decades of opposition to the Mubarak regime and its extensive charitable and social work.

In Cairo, the rising star of the movement, Amr Hemzawi, won a seat in the upmarket Heliopolis district, but elsewhere leading figures of the revolution were either struggling or had been beaten.

In Tahrir Square, the epicentre of protests against Mubarak, demonstrators had returned last week to protest against the military rulers who took over when the strongman quit but their numbers had dwindled to a few hundred on Saturday.

According to independent daily Al-Masri Al-Yum, no women were elected in the first round, with television presenter Gamila Ismail, actress Tayssir Fahmi and Wafd candidate Nihal Aahdi all eliminated.

Aahdi told the paper that the failure of women candidates was because "religious parties dominate Egyptian society and the Muslim Brotherhood and Salafists dominated the results."

It was only the opening phase of a parliamentary election that is taking place in three stages, but the returns reveal the political trends that will shape the country's transition to democracy.

For the lower house of parliament, the rest of the country will vote in a further two stages later this month and in January. An upper house will then be elected in another three stages.

Voters are required to pass three votes for members of the new lower house: Two for individual candidates and one for a party or coalition.

All but four of the individual contests in this week's election will go into a run-off scheduled for Monday because no candidate gained an outright majority.

The prospect of an Islamist-dominated parliament raises fears among liberals about civil liberties, religious freedom in a country with the Middle East's largest Christian minority, and tolerance of multi-party democracy.

Independent Salafist presidential candidate Hazem Abou Ismail told a television interviewer this week that he would prevent "men and women from sitting together in public," press reports said.

Leaders of the Muslim Brotherhood, set to form the largest bloc in parliament, have repeatedly stressed their commitment to multi-party democracy and inclusiveness, and have pledged to ensure freedoms.

The Brotherhood's Freedom and Justice Party says it strives for a "civil state, defined as a non-military non-religious state... that respects human rights" according to its political programme.

The Brotherhood and other political parties are expected to face a fierce power struggle with the army to ensure the complete transfer of power to the new civilian leaders.

The FJP has already said it expects to be asked to form a new government to replace a military-appointed administration due to be announced later on Saturday.