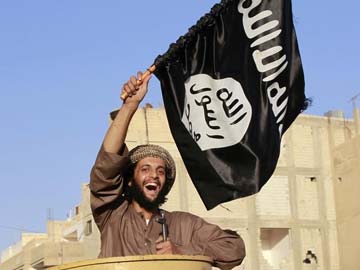 A militant Islamist fighter on the streets of Syria's northern Raqqa province (Reuters).

"IS fighters fired on a military aircraft which crashed," the Britain-based group said.

"It is the first aircraft shot down since the regime launched air strikes against the jihadists in July following their declaration of a caliphate in late June," said the group, which relies on a wide network of doctors and activists for its reports.

Observatory director Rami Abdel Rahman told AFP that the plane crashed into a house in the Euphrates Valley city, the sole provincial capital entirely out of Syrian government control.

He said there were casualties on the ground.

The air force carried out five sorties against IS targets in Raqa on Tuesday morning, he added.

A photograph posted on a jihadist Twitter account purported to show the burnt out wreckage of the plane.

"Allahu Akbar (God is greatest), thanks to God we can confirm that a military aircraft has been shot down over Raqa," another account said, congratulating the "lions of the Islamic State."

President Bashar al-Assad's regime has stepped up its air campaign against IS in eastern Syria in recent weeks, hitting its Euphrates valley strongholds in Raqa and Deir Ezzor provinces and jihadist-held areas of the northeastern province of Hasakeh.

An air strike on an IS training camp in the Deir Ezzor town of Tibni killed 17 militants and a child on Saturday.

US President Barack Obama announced last week he had authorised the expansion to Syria of the air campaign against IS that he launched in neighbouring Iraq in early August.

Promoted
Listen to the latest songs, only on JioSaavn.com
There have been no US strikes in Syria so far but Obama's announcement, which was made in defiance of the Syrian government, drew protests from Damascus and its Iranian and Russian allies.

It is not the first time that a Syrian military aircraft has been downed by rebel fire. One was shot down over the northern city of Aleppo in 2012.