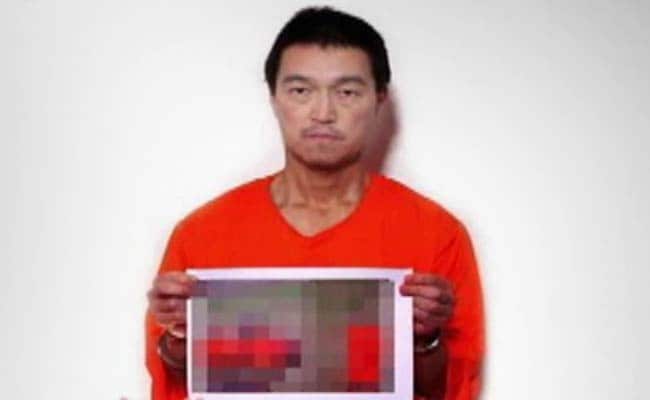 A still from a video released by the Islamic State shows Kenji Goto holding a picture of an executed, Haruna Yukawa.

Beirut:
The latest Islamic State hostage drama involving a veteran Japanese war correspondent and a young Jordanian pilot marks the first time the group has publicly demanded prisoner releases. It also signals a change in the extremist group's propaganda technique.
Far from the high-tech, slickly edited videos involving beheaded Western hostages through which the group impressed supporters and terrorised opponents, recent messages purporting to be from Japanese hostage Kenji Goto have been through digitized, audio dispatches featuring either still photos or text.
A change has been noted even before.
The first video involving the Japanese, released on January 20, conformed to previous Islamic State group videos and bore the logo of its al-Furqan media group, showing both Goto and Haruna Yukawa, another Japanese hostage, kneeling next to a masked militant holding a knife. A $200 million ransom demand was made.
At first glance the video appeared to be filmed in the same location as those showing American hostages James Foley, Steven Sotloff and Peter Kassig, and British captives David Haines and Alan Henning.
Experts who examined the video, however, said it was more likely filmed in an indoor studio with a false backdrop.
"There's a chink in the armor," said Veryan Khan, editorial director for the Terrorism Research and Analysis Consortium.
"The Islamic State's media arm is a full-fledged wing of their government... the United States doesn't even put as much effort into their media wing as the Islamic State does. There's been something messing up in their video production machine," she said.
The following two videos, released Saturday, January 24 and Tuesday, January 27, did not conform to previous Islamic State group videos and did not bear the logo of al-Furqan. In those audio messages, the group dropped its demand for ransom and demanded instead that Jordanian authorities release an Iraqi woman prisoner, Sajida al-Rishawi. The message also said that Yukawa had been beheaded.
The Associated Press could not independently verify the messages' contents, though Japanese government officials said it was highly likely they were legitimate, without elaborating.
The messages have raised questions on why the group was changing tactics, resorting instead to what appeared to be unprofessional rush jobs.
"This is typical in hostage situations like this where videos are being produced at a rapid pace in response to unpredictable events," said Ben Venzke, CEO of IntelCenter, a company that provides counter-terrorism intelligence.
Khan said the way the group has communicated its message has been changing since American aid worker Peter Kassig was beheaded in September. He was the last of the Western hostages to be killed.
Previous videos showed the hostages delivering a message with the same militant man standing next to them, before they are killed. Their severed heads were then showed placed on top of the body.
The beheading of Kassig was tacked at the end of a full feature-length, high-definition video showing foreign fighters beheading more than a dozen Syrian soldiers simultaneously. The same video then showed the same militant, a man speaking with a British accent, standing near Kassig's head.
Kassig's body is never seen nor is there any message from him.
Some experts said the changes may be a reflection that the group is feeling squeezed. The US-led coalition began targeting IS militants in Syria in mid-September, and has gradually intensified its aerial bombardment of suspected IS infrastructure in both Syria and Iraq.
US officials say thousands of Islamic State militants have been killed in both countries since then. Intelligence gathering efforts have also improved. In response, the group has largely melted into urban areas to elude the threat.
It could also be a way for the hostage-takers to further cover their tracks and not give experts any reliable signals to indicate their location.
The group is also being squeezed online, where companies are actively trying to remove the group's gruesome videos and close down their Twitter accounts.
Venzke said the fact that the last three releases featuring audio statements from Goto lacked the same sophistication as others did not suggest an overall degradation in the Islamic State group's video production capability.
"The Islamic State has and continues to grow one of the most sophisticated video production efforts by any jihadi group. It is unmatched in sheer volume and speed," he said.
Promoted
Listen to the latest songs, only on JioSaavn.com
Comments
Japanese HostageIslamic StateJordanian pilotHaruna YukawaKenji GotoUS air strike