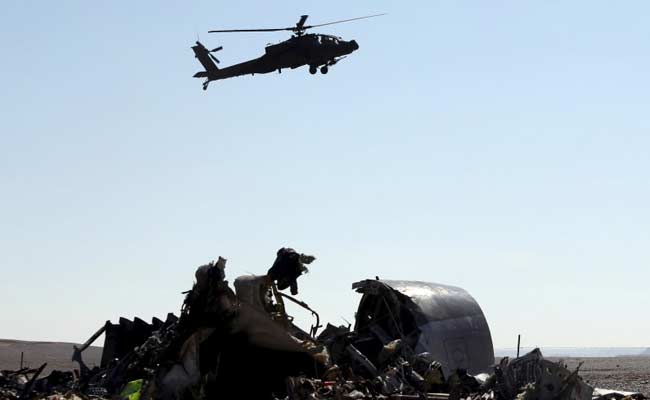 An Egyptian military helicopter flies over debris from a Russian airliner which crashed at the Hassana area in Arish city, north Egypt, November 1, 2015. (Reuters)

Cairo, Egypt: Islamic State's Egyptian affiliate dismissed in an audio message today doubts that it had downed a Russian passenger plane over Egypt's Sinai Peninsula, killing all aboard, and said it would tell the world how it did so in its own time.

The Russian-operated Airbus A321M crashed on Saturday shortly after taking off from the Red Sea resort of Sharm al-Sheikh on its way to St Petersburg, killing all 224 people on board.

Sinai Province, an Egyptian group loyal to Islamic State, said in a statement the same day that it had brought down the airliner "in response to Russian air strikes that killed hundreds of Muslims on Syrian land".

The claim was dismissed by Russian and Egyptian officials. Security experts and investigators have said the plane is unlikely to have been struck from the outside and Sinai-based terrorists are not believed to possess the technology to shoot down a jet from a cruising altitude above 30,000 feet.

Russian officials have, however, said the plane probably broke up in the air, leaving open the prospect of some kind of explosion on board.

Asked to comment on those remarks and local press reports that the black box voice recorders had picked up unusual sounds before it crashed, Civil Aviation Minister Hossam Kemal said the facts had yet to be established.

"This is all speculation. There is nothing definitive until the investigation commission completes its probe," he said.

In an audio message posted on a Twitter account used by the group, Islamic State's Egyptian affiliate insisted it was behind the crash. The claim could not immediately be authenticated.

"We say to the deniers and the doubters: Die from your frustration. We, with God's grace, are the ones who brought it down, and we are not obliged to disclose the mechanism of its demise," the speaker said.

"So go to the wreckage, search, bring your black boxes and analyse, give us the summary of your research and the product of your expertise and prove that we did not bring it down or how it came down," he said.

"We will disclose the mechanism of its demise at the time that we want and in the way that we want."

The hardline group has called for war against both Russia and the United States in response to their air strikes in Syria.

Islamic State sup[porters in Iraq issued a video on Tuesday congratulating their Egyptian colleagues and warning Russian President Vladimir Putin that more was to come. They handed out sweets to celebrate the crash.

Sinai-based terrorists have killed hundreds of Egyptian soldiers and police in recent years and have also attacked Western targets. Egypt has carried out air strikes on them.

Islamic State websites have in the past claimed responsibility for actions that have not been conclusively attributed to them. Officials say there is no evidence to suggest so far that a bomb brought down the plane.
© Thomson Reuters 2015