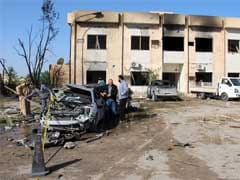 A general view shows the damage at the scene of an explosion at the Police Training Centre in the town of Zliten, Libya, January 7, 2016. (Reuters Photo)

Tripoli: ISIS has claimed responsibility for a suicide truck bombing on a Libyan police training centre on Thursday that killed at least 47 people in the worst militant attack since the fall of Muammar Gaddafi in 2011.

ISIS fighters have expanded their presence in the North African state, taking advantage of turmoil to control the city of Sirte and launch attacks on oilfields and key oil ports.

"This operation is one in a series of the battle of Abu al-Mughira al-Qahtani, which will not stop until we liberate all Libya," ISIS's Tripoli militancy said in a statement.

The group said one of its militants had died carrying out the suicide bomb attack, but Libya authorities have so far not confirmed that detail.

The truck bomb exploded at the police training centre in the coastal town of Zliten just as hundreds of recruits were gathered there for a morning meeting. More than 100 people were also wounded, many by shrapnel.

Since a NATO-backed revolt ousted Gaddafi, Libya has slipped deeper into turmoil with two rival governments and a range of armed factions locked in a struggle for control of the OPEC state and its oil wealth.

In the chaos, ISIS militants have grown in strength, targetting Tripoli and also the OPEC nation's oil infrastructure, including this week's shelling of two major oil export terminals in the east.