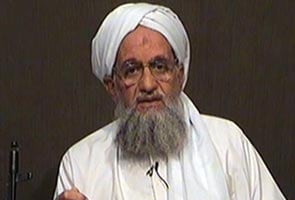 Islamabad: Pakistani intelligence officials knew about a meeting between Al Qaeda leader Ayman al-Zawahiri and slain Tehrik-e-Taliban Pakistan head Baitullah Mehsud in 2008 but then "lost" track of the terror mastermind, according to a media report on Monday.

The meeting, which reportedly took place during the first half of 2008, might have been a precursor to the CIA's drone attacks against Mehsud, which ultimately killed him in the eighth Predator strike that targeted him in August 2009.

It was not precisely known whether the meeting took place in South Waziristan tribal region, which was completely controlled by the Pakistani Taliban in 2008, or somewhere in Afghanistan.

To substantiate the claim, the unnamed officials said Mehsud was never targeted by US drones till 2008 because the Americans did not consider the Pakistani Taliban a "serious" enemy before Mehsud's interaction with al-Zawahiri.

"It was only after (this meeting) that the Americans started taking Pakistani Taliban as a potent threat," an official said.

"We were 100 per cent sure from the start about collusion between  Al Qaeda and TTP... the Americans came to the same conclusion later," said a former military official who had served as security secretary for the tribal areas under former President Pervez Musharraf.

Brigadier (retired) Mahmood Shah, a noted defence analyst, said though he retired two years before the meeting, he got hold of information that the meeting between the two terrorists took place.

Promoted
Listen to the latest songs, only on JioSaavn.com
ISI chief Lieutenant Gen Ahmed Shuja Pasha has reportedly assured top US officials during his trip to Washington last week that Pakistani forces would take action if the CIA came up with actionable intelligence on the whereabouts of al-Zawahiri, who was made the head of the Al Qaeda after the killing of Osama bin Laden in a covert American raid on May 2.