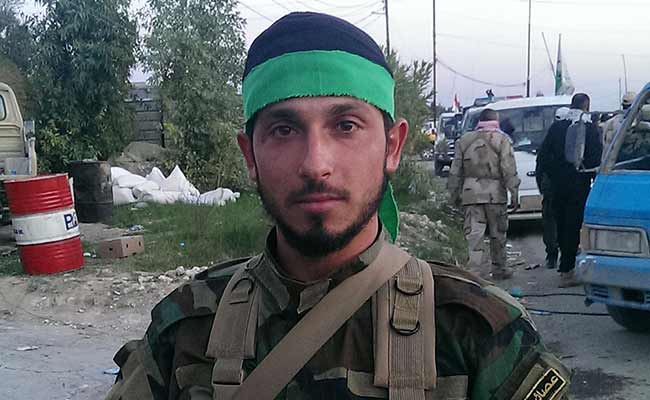 Nawar Mohammed, one of some 250 Sunni residents of the Al-Alam village. (AFP)

Wearing a camouflage uniform with militia patches and a green headband, Nawar Mohammed is the image of an Iraqi Shiite fighter except for one detail: he is Sunni.

Mohammed is one of some 250 Sunni residents of Al-Alam who joined Asaib Ahl al-Haq, an Iranian-backed Shiite militia with a fearsome reputation for kidnappings and killings targeting their community, to battle the Islamic State group after it seized their town.

It would once have been all but unthinkable for a member of Iraq's Sunni Arab minority to join a Shiite militia, but opposition to IS, which overran large areas north and west of Baghdad last June, is transcending deep-seated sectarian divisions.

"The whole world is surprised by this -- it's the first time in the history of Asaib that they formed a Sunni unit," said Mohammed, standing with a Kalashnikov assault rifle hanging at his side. "Asaib trained us, and we became part of Asaib," he said.

"Asaib, Sunni or Shiite, there is no difference -- these circumstances united Iraq," Mohammed said. "God willing, there will not be any more sectarianism."

The formation of the unit, which some call "Asaib al-Alam", is a positive sign and its fighters seem genuine when praising Asaib Ahl al-Haq.

Having Sunnis fighting for Shiite militias brings direct practical benefits to both sides: the Sunnis receive training and support they need to retake their homes, while the militias take a step toward shedding their reputation for sectarian killings.

Despite having only limited training, Asaib al-Alam took part alongside more experienced militiamen and security forces in the fight for Al-Alam, part of a major drive aimed at retaking the nearby city of Tikrit from IS.

"The purpose of forming the local Asaib in Sunni areas is to strike sectarianism," said Shiite militiaman Hussein Abdulabbas.

He also noted that having fighters who come from an area where a battle takes place brings useful local knowledge.

Defence Minister Khaled al-Obeidi praised the participation of local residents in the fight to retake Tikrit as "a very positive message to the Iraqi people."

Jassem al-Jbara, the head of the Salaheddin provincial council's security committee, said he had encouraged the formation of similar local forces in other areas.

In "Al-Alam, its sons are holding it," Jbara said. "There are no other security forces," and "there is no ransacking, no destruction, no vandalism," he said.

Though it was still damaged, Al-Alam is one of the most intact towns retaken from IS, especially compared to nearby Albu Ajil, which some believe cooperated with IS.

Many houses and buildings have been burnt in that town, though it is unclear who set the fires.

Al-Alam residents say members of the Jubur tribe fought against IS before the jihadists took control of the town, resistance that marked out Juburi men as targets.

"I didn't go out -- I stayed in the house. The distance to my uncle's house is 100 metres (yards). I would only go out and come back," said Mohammed, who stayed in the town for some five months after the takeover.

"The people were not safe -- not in the street, not safe eating, not safe sleeping -- there wasn't life," Mohammed said.

He said he was eventually discovered and fired on as he ran away. He then hid in a house occupied solely by women before making his escape, and later joined the unit that became Asaib al-Alam.

Sheikh Khaled al-Jbara looks the part of a Shiite militia commander with a black headscarf and Asaib Ahl al-Haq patches on the sleeves of his uniform, but he is a leader in the Jubur tribe and the head of Asaib al-Alam.

Promoted
Listen to the latest songs, only on JioSaavn.com
"They consider us to be like our brothers the Shiites," Sheikh Khaled said of IS jihadists. While members of Asaib al-Alam take that as a compliment, he noted that for IS, it means they are people "outside of the (Islamic) religion" who must be killed.

"Today, over 600 young men from this area made contact with the (Shiite) sons of the south," he said, referring to those who joined Shiite groups including Asaib and the Badr Organisation. "I consider this process to be treatment for Iraq."