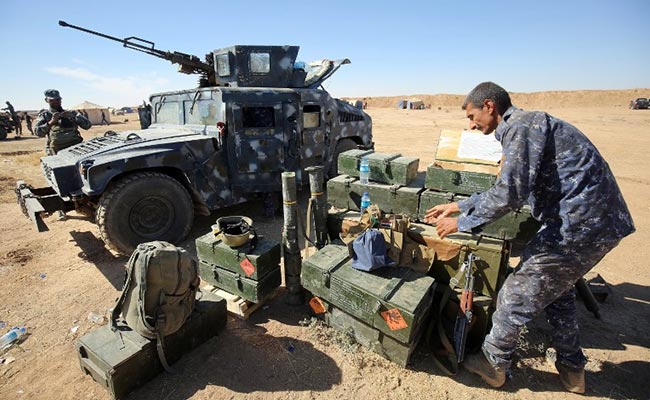 Mosul: Elite Iraqi forces battled house by house in the Old City of Mosul on Saturday, inching towards the mosque where the ISIS proclaimed its 'caliphate' in 2014, a spokesman said.

Commanders said that progress in the densely populated warren of alleyways was slow but that government forces had made new gains from ISIS in the heart of their last major urban bastion in Iraq.

He was referring to the Al-Nuri Mosque, where ISIS terrorist Abu Bakr Al-Baghdadi declared the cross-border 'caliphate' spanning jihadist-controlled territory in Iraq and Syria in his sole public appearance in July 2014.

"We are encountering difficulties - bad weather and streets too narrow for our military vehicles which cannot enter," Mr Zuwaidi said.

"The fighting is street by street, house by house," he said, as the sound of mortar fire rang out from the heart of Iraq's second city.

The battle for the Old City was always expected to be the toughest of the campaign to retake Mosul from ISIS, further complicated by the presence of hundreds of thousands of civilians believed to have stayed on under ISIS rule.

Iraqi forces launched the huge operation last October, retaking the east of the city in January before setting their sights on the smaller but more densely populated west.

The Tigris River divides the two parts of Mosul. The Old City lies at the heart of the west bank.

The Rapid Response Force is being backed up by the federal police who have made steady gains in recent days.

Promoted
Listen to the latest songs, only on JioSaavn.com
That came after Jawdat announced the capture of the Al-Basha Mosque and the Bab al-Saray market on Friday.

Iraqi forces had already taken a string of key targets in west Mosul, including the airport, the train station, Mosul Museum and the provincial government headquarters.