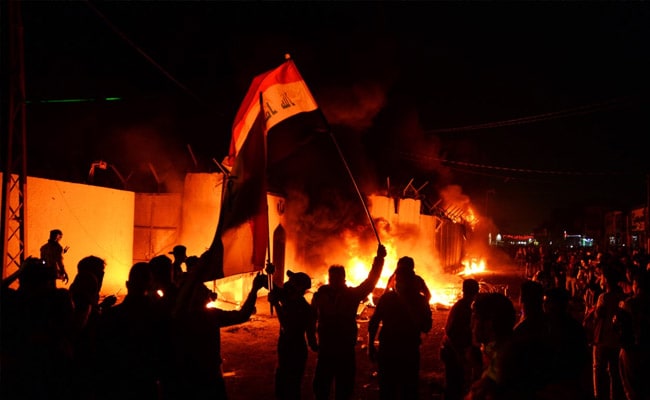 Iraq's protest-hit cities saw one of their bloodiest days yet on Thursday as a government crackdown killed nearly 40 demonstrators following the dramatic torching of an Iranian consulate.

The country's capital and south have been rocked by the worst street unrest since the 2003 US-led invasion that toppled Saddam Hussein, with a protest movement venting fury at the government and its backers in neighbouring Iran.

The highest toll was in the flashpoint southern city of Nasiriyah, where 25 people were killed when security forces used "excessive force" to break up rallies, according to the Iraqi Human Rights Commission.

Another two protesters were killed in Baghdad and ten died in the Shiite shrine city of Najaf, where demonstrators had torched the Iranian consulate late Wednesday.

Crowds outraged at Tehran's political influence in Iraq had stormed and burned down the mission, yelling "Victory to Iraq!" and "Iran out!"

But by the afternoon, following the bloody crackdown in the restive southern city of Nasiriyah, the premier had already sacked one commander, General Jamil Shummary.

The governor of Dhi Qar province, of which Nasiriyah is the capital, resigned later on that evening.

Medics in Nasiriyah said they had to carry out more than 80 life-saving surgeries in hospitals crowded with casualties.

Dhi Qar announced three days of mourning as thousands attended funeral processions there in defiance of a curfew announced earlier in the day.

"We're staying until the regime falls and our demand are met!" they chanted.

They then surrounded its main military headquarters as armed members of the area's powerful tribes deployed along main highways to block military reinforcements trying to reach the city.

"This bloodbath must stop now."

The new phase of unrest in southern Iraq was unleashed after protesters late Wednesday stormed the Iranian consulate in Najaf, apparently evacuated by its staff.

An AFP correspondent saw them setting tyres ablaze around the site, sending flames and thick smoke into the night sky.

Demonstrators have blamed powerful eastern neighbour Iran for propping up the Baghdad government which they are seeking to topple.

"Iran has officially communicated its disgust to the Iraq ambassador in Tehran," he told Iran's state news agency IRNA.

AFP's correspondent said clashes went on into the night between protesters and armed men in civilian clothes.

Many expected Iraq's highest Shiite authority Grand Ayatollah Ali Sistani, who lives in Najaf, to address the violence in his weekly sermon on Friday.

He has backed the protests and repeatedly called for restraint in dealing with them.

The two countries have close but complex ties and Tehran holds significant sway among Iraqi political and military leaders.

Those meetings, sources told AFP, brought firebrand cleric Moqtada Sadr back into the fold after he called on Abdel Mahdi to resign.

But on Thursday, Sadr reverted course, saying it would "be the beginning of the end for Iraq" if the government did not step down.

Sit-ins, road closures and street marches have shuttered public offices and schools for weeks in many southern cities.

On Thursday, clashes flared near Karbala's provincial headquarters between some 200 protesters and riot police using tear gas and flash bangs.

Protesters kept up sit-ins in Kut, Amara and Hilla, all south of the capital, despite an increased security presence.

In the oil-rich port city of Basra, most government offices reopened but schools remained closed as security forces deployed in the streets.

Iraq is OPEC's second-largest crude producer and the oil exported through Basra's offshore terminals makes up more than 90 percent of the government's budget.

Corruption is rampant in Iraq, ranked the world's 12th most graft-ridden country by Transparency International.

The World Bank says one in five Iraqis lives in poverty and youth unemployment stands at 25 percent.