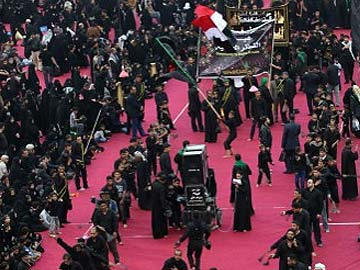 Shiite Muslim worshipers flagellate themselves as pilgrims gather near the shrine of Imam Abbas in preparation for the peak of Ashura rituals in Karbala, 50 miles (80 kilometers) south of Baghdad on November 12, 2013.

Baghdad, Iraq: Violence across Iraq, including bombings against Shiites, killed 23 people on Wednesday as worshipers massed in a shrine city on the eve of major commemoration rituals often targeted by militants.

The bloodshed was the latest in a months-long surge in unrest that has forced Prime Minister Nuri al-Maliki to appeal for Washington's help in combating militancy as Iraqi action has failed to stem the unrelenting wave of attacks.

Bombings on Wednesday mostly struck north and west of Baghdad, targeting Shiite Muslims and members of the security forces.

On the outskirts of Baquba, north of the capital and one of Iraq's most violent areas, three coordinated bombs struck a gathering of Shiite pilgrims marking Ashura.

Overall, eight people were killed and 25 others were wounded in the blasts, security and medical officials said.

Millions of Shiites from Iraq and around the world mark Ashura, which this year climaxes on Thursday, by setting up procession tents where food is distributed to passers-by and pilgrims can gather, or by walking to Karbala, which is home to a shrine to Imam Hussein.

Hussein, grandson of the Prophet Mohammed, was killed by the armies of the caliph Yazid in 680 AD and his death in Karbala has over time come to symbolise the split between Islam's Sunni and Shiite sects.

Tradition holds that the venerated imam was decapitated and his body mutilated, and throngs of modern-day Shiites beat their chests and self-flagellate during Ashura to show their historic guilt for not coming to Hussein's aid.

Sunni militants linked to Al-Qaeda, who regard Shiites as unbelievers, often step up their targeting of Iraq's majority community during Ashura and the subsequent rituals of Arbaeen.

In past years, pilgrims have been targeted by bombings, including a string of attacks the day before Ashura in 2011 that killed 28 people.

As a result, security measures are stepped up with more than 35,000 soldiers and policemen currently deployed to Karbala and surrounding areas, with concentric security perimeters barring vehicles from entering the city while helicopters hover overhead.

Provincial authorities expect two million pilgrims -- Iraqis as well as foreigners -- will have visited Karbala in the 10 days leading up to Ashura, with all of the city's hotels fully booked.

"I carry these iron weights every year, since I was 16 and until now," said Shawkat Hussein, a 60-year-old pilgrim visiting Karbala from Pakistan, referring to heavy iron chains hanging around his neck.

"What I am carrying does not compare to what Hussein did for his religion."

Shiites make up about 15 percent of Muslims worldwide. They represent the majority populations in Iraq, Iran and Bahrain and form significant communities in Afghanistan, Lebanon, Pakistan and Saudi Arabia.

Elsewhere in Iraq on Wednesday, bombings targeting security forces killed 15 people, while police gunned down three militants in a raid.

East of the predominantly Sunni Arab town of Tikrit, a suicide bomber detonated a vehicle rigged with explosives at a police checkpoint, killing 11 people, including three policemen.

Near the former insurgent bastion of Fallujah, two bombs targeting the homes of policemen, followed by a third that went off as onlookers gathered at the scene and killed four.

Wednesday's deaths were the latest in Iraq's worst violence since 2008, with more than 5,600 people killed this year, according to an AFP tally based on reports from security and medical officials.

Maliki has called for help from the United States in the form of intelligence-sharing and the delivery of new weapons systems in an effort to deal with the unrest.

Promoted
Listen to the latest songs, only on JioSaavn.com
In addition to major security problems, authorities have failed to provide adequate basic services such as electricity and clean water, and corruption is widespread.

Political squabbling has paralysed the government, while parliament has passed almost no major legislation in years.