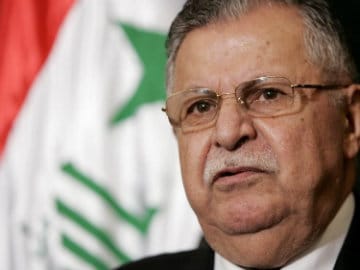 Arbil, Iraq: President Jalal Talabani returned to Iraq on Saturday for the first time since he suffered a stroke a year and a half ago and was flown abroad for medical treatment, state television said.

During Talabani's absence, Sunni insurgents have overrun a large area of Iraq and negotiations are currently underway to form a new power-sharing government that would replace him as president.

Iraqi politicians named a moderate Sunni Islamist as speaker of parliament earlier this week, but have yet to choose a president or prime minister, a position which the incumbent Nuri al-Maliki is fighting to retain.

Although the presidency is a largely ceremonial position, Talabani was widely seen a unifying figure, both within Iraq and his own Patriotic Union of Kurdistan (PUK) party, which has struggled to contain internal divisions without him at the helm.

In broadcast footage of the octogenarian earlier this year, he appeared much weakened, suggesting he is unlikely to reprise an active role in politics.

Nevertheless, Talabani's return will help rally support for the PUK and may help unite competing factions around one candidate for the presidency, which is typically from the party.

This week, the PUK's Najmaldin Karim nominated himself for president without the blessing of the party leadership, Kurdish political sources said, pitting himself as a rival to Barham Saleh, who had been touted as the frontrunner for the post.

In recent years, the PUK has lost ground in its own stronghold of Sulaimaniyah, upsetting the political duopoly, whereby it had shared power with the Kurdistan Democratic Party (KDP) since the region gained autonomy in 1991.

The PUK was outperformed by former opposition party Gorran (Change) in a regional paliamentary election last year and pushed down into third place.

Promoted
Listen to the latest songs, only on JioSaavn.com
But in the nationwide Iraqi election in April, the PUK regained stature thanks to its popularity Kirkuk, which is outside the formal boundary of the region but was brought under Kurdish control last month.