Iran Will "Never" Have A Nuclear Weapon, Says Donald Trump

New sanctions were imposed on Iran following missile strikes by it on bases housing US troops in Iraq. 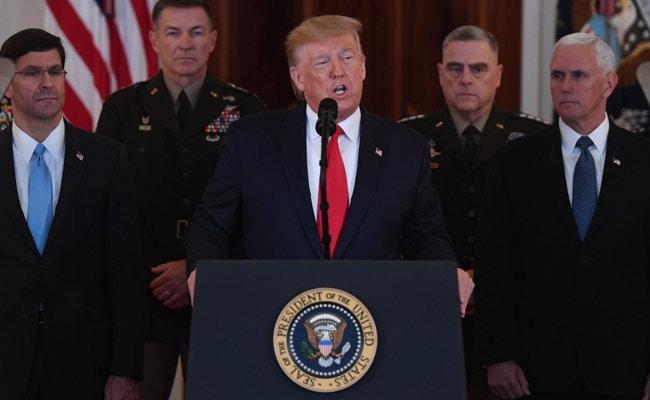 US President Donald Trump said Iran is getting "hurt very badly" by US sanctions. (File)

Iran will never have a nuclear weapon, US President Donald Trump said on Thursday adding that Tehran was getting "hurt very badly" by US sanctions.

"Iran right now is a mess. They can straighten out the economics of their country very, very quickly. Let us see whether or not they negotiate," he said at a White House event.

New sanctions were imposed on Iran following missile strikes by it on bases housing US troops in Iraq.

Iranian state TV had said the attacks were in revenge for the killing of the commander of the Revolutionary Guards, General Qasem Soleimani, in a US drone strike, which was ordered by Trump.

Donald Trump said that Iran cannot have a nuclear weapon.

"Iran will never have a nuclear weapon. They understand that. We have told them very strongly. Iran now is not wealthy like it was when President (Barack) Obama handed $150 billion. There are much different country," he said.

On January 8, Donald Trump had said as long as he is the president of the United States, Iran will never be allowed to have a nuclear weapon.

"We'll see whether or not they want to negotiate. Maybe they want to wait until after the election and negotiate with a weak Democrat, somebody like a (Joe) Biden or a Pocahontas or (Pete) Buttigieg or one of these characters," he said.

Iran, he said, is getting "hurt very badly" by the sanctions. "It all can end very quickly. But as to whether or not they want, that's up to them. Not up to me, it''s totally up to them," the US President said.

The Iranian nuclear deal, Trump said, has not worked. "I always call it the Iran Nuclear Deal that didn't work. The Iran Deal. It was just something that it is no good for our country. It expires in a short time," he said.