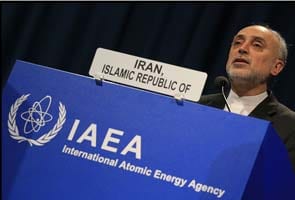 "Tomorrow (Monday) the 1,000 megawatt Bushehr nuclear power station will be handed over to Iran," Salehi told the official IRNA news agency on Sunday.

"But for another two years it will be under Russian guarantee and a number of Russian experts will remain in place to give advice and technical assistance," he added.

Salehi is to join Russian officials at the plant for an official handover ceremony on Monday.
He said he expected work to start soon on a second nuclear power plant on completion of talks with Moscow.

"Negotiations are continuing and are well-advanced," he said. "Work will start soon," he added, without giving a date.

Construction of the Bushehr plant started in the 1970s with the help of German company Siemens, which quit the project after the 1979 Islamic revolution over concerns about nuclear proliferation.

In 1994, Russia agreed to complete the plant and provide fuel for it for 10 years, with the supply deal committing Iran to returning the spent fuel, amid Western concerns over its controversial uranium enrichment programme.

Promoted
Listen to the latest songs, only on JioSaavn.com
Work began in 1995 but it was completed only in 2011 after multiple delays, and full capacity was achieved only this year after further hitches.

Gulf Arab states have expressed concern about the plant but Iran and Russia say it is subject to International Atomic Energy Agency safeguards.