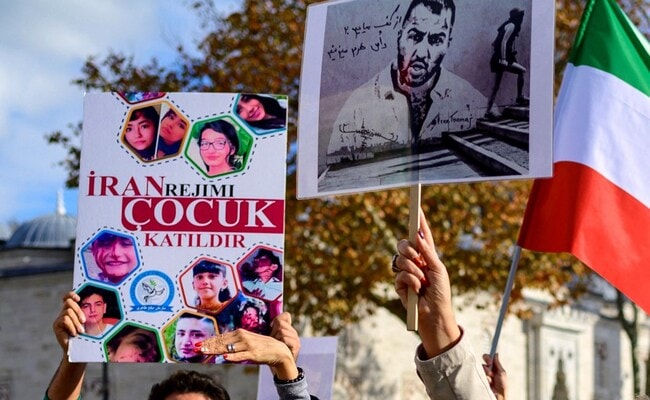 Toomaj Salehi is one of a number of prominent figures to be arrested in Iran.

The family of an Iranian rapper detained for supporting protests over Mahsa Amini's death said his life was at risk after he went on trial behind closed doors on Saturday.

Iran has intensified a crackdown on the protests sparked by the September 16 death of Amini after her arrest in Tehran for allegedly breaching the country's strict dress code for women.

"Dissident rapper Toomaj Salehi had the first day of his so-called 'trial' today in Tehran without a lawyer of his choice," the New York-based Center for Human Rights in Iran said on Twitter.

His family tweeted that his "life is at serious risk right now" as he faced charges of "enmity against God" and "corruption on earth" -- sharia-related charges that are capital crimes in the Islamic republic.

Salehi had disappeared at the end of October before appearing in a video published on November 2 by Iran's state-run media.

The video claimed to show the first images of Salehi after his arrest.

It depicted a tattooed man in a sleeveless black T-shirt sitting on the ground, wearing a blindfold and looking bloodied and bruised.

The man says: "I am Toomaj Salehi. I said I made a mistake. I said... that you should run. I didn't mean you."

Activists condemned the recording as a forced confession extracted under duress.

Salehi is one of a number of prominent figures to be arrested in a mass crackdown that has seen dozens of journalists, lawyers, civil society and cultural figures arrested.

His detention came shortly after he gave an interview highly critical of the regime to the Canadian Broadcasting Cooperation.

"You are dealing with a mafia that is ready to kill the entire nation... in order to keep its power, money and weapons," Salehi said in the interview.

Iranian state media claim Salehi was arrested while trying to cross one of the country's western borders, but his family have denied this saying he was in the southwestern province of Chaharmahal and Bakhtiari at the time.