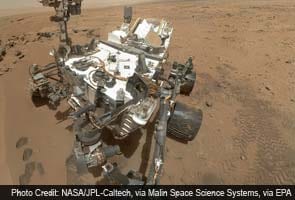 The Mars rover Curiosity has found something - something noteworthy, in a pinch of Martian sand. But what is it?

The scientists working on the mission who know are not saying. Outside that team, lots of people are guessing.

The intrigue started last week, when John P. Grotzinger, the Mars mission's project scientist, told National Public Radio: "This data is going to be one for the history books. It's looking really good."

And then he declined to say anything more.

Fossils? Living microbial Martians? Maybe the carbon-based molecules known as organics, which are the building blocks of life? That so much excitement could be set off by a passing hint reflects the enduring fascination of both scientists and non-scientists with Mars.

"It could be all kinds of things," said Peter H. Smith, a planetary scientist at the University of Arizona who was the principal investigator for NASA's earlier Phoenix Mars mission but is not involved with Curiosity. "If it's historic, I think it's organics. That would be historic in my book."

Grotzinger and other Curiosity scientists will announce their latest findings Monday in San Francisco at a meeting of the American Geophysical Union.

Do not expect pictures of Martians, though.

Guy Webster, a spokesman for NASA's Jet Propulsion Laboratory in Pasadena, Calif., which operates Curiosity, said the findings would be "interesting" rather than "earthshaking."

Webster noted that "a really big announcement," if one should occur, would most likely be made at NASA headquarters in Washington and not at an academic conference.

Whatever is revealed will be linked to the work of Curiosity's sophisticated chemistry laboratory instrument, Sample Analysis at Mars - SAM, for short. The rover's robotic arm dropped the first bit of sand and dust into the instrument on Nov. 9, and the scientists have been analyzing and contemplating ever since.

One of the main goals of SAM is to identify organic molecules, but it would be a big surprise for organics to show up in a first look at a sand sample selected more as a test exercise than with the expectation of a breakthrough discovery.

Curiosity will be headed toward layers of clays, which could be rich in organics and are believed to have formed during a warm and wet era early in the planet's history. But Curiosity has months to drive before arriving at those locations.

The Curiosity scientists have learned through experience that it pays to double-check their results before trumpeting them. An initial test of the Martian atmosphere by the same instrument showed the presence of methane, which would have been a major discovery, possibly indicating the presence of methane-generating microbes living on Mars today. But when the scientists ran the experiment again, the signs of methane disappeared, leading them to conclude that the methane found in the first test had come from air that the spacecraft had carried to Mars from its launching spot in Florida.

Webster, who was present during the interview with NPR, said Grotzinger had been talking more generally about the quality of data coming back from Curiosity and was not suggesting that the data contained a breakthrough surprise.

"I don't think he had in mind, 'Here's some particular chemical that's been found,"' Webster said. "That's not my impression of the conversation."

On Twitter, Curiosity chimed in: "What did I discover on Mars? That rumours spread fast online. My team considers this whole mission 'one for the history books."' (The public information staff at the Jet Propulsion Laboratory writes the posts for the rover.)

This would not be the first time that rumors eclipsed the actual findings from Mars.

In 2002, the Mars Odyssey orbiter found evidence of frozen reservoirs of water beneath the surface of Mars, leading to breathless rumours in the British press that the Bush administration was about to announce a commitment to send astronauts there within 20 years. The White House remained quiet.

Smith, the Mars Phoenix scientist, had a similar experience in 2008 when Aviation Week reported, "The White House has been alerted by NASA about plans to make an announcement soon on major new Phoenix lander discoveries concerning the 'potential for life' on Mars."

"The blogosphere lit up," Smith said.

At a hastily arranged news conference, Smith revealed the actual news: chemicals known as perchlorates had been found in the soil. "The public was not interested in that," he said.

If Curiosity's pinch of sand indeed contained organics, it would again revive the possibilities of life on Mars. For now, Curiosity scientists are still analysing the data.

Promoted
Listen to the latest songs, only on JioSaavn.com
"I do want to temper expectations," said Webster, the spokesman. "But then again, I don't know exactly what they're going to say they've found."